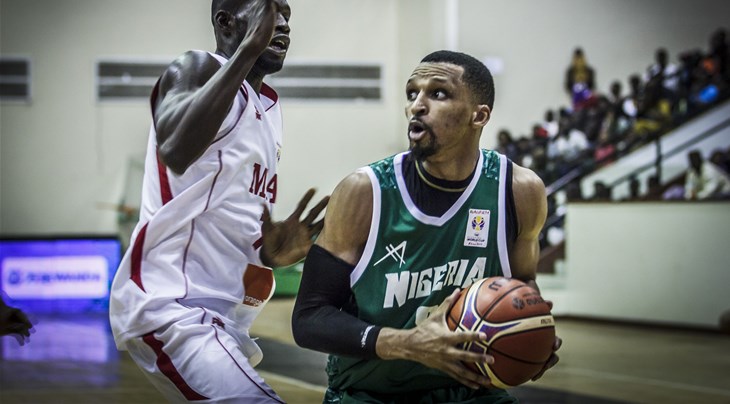 Michael Efevberha is one name that got stuck to many in Bamako, Mali at the just concluded FIBA Basketball World Cup 2019 African Qualifiers for the simple reason that he ranked among the best players.

He was simply the go-to-go guy especially with the ease in which his three-pointers were dropping in the basket, FIBA.com reports.

In fact, in the clash against Rwanda, Efevberha hit five shots from beyond the arc in less than three minutes, forcing Rwand’s head coach Moise Mutokambali to call a time out.

To imagine that the 6ft4in (1.92m) shooting guard had been out of the Nigerian national team for upwards of eight years and played the way he did indeed left many wondering at his dedication to the game and his country.

But Efevberha, who plies his trade with Lebanese side Sagesse, revealed that he is glad to have made a return to the national team.

“It feels good to be back and these crops of players have made me really proud. My family is in Nigeria and I am trying all my possible best to make them proud. I am happy playing for Nigeria,” he told FIBA.basketball.

Revealing his self motivation, the 33-year-old stated that it comes from within as there is always something to fight for.

“I got a self motivation. You know I have a daughter, she is the person I think about and that alone pushes me everyday to be great and I also think about my wife knowing that these two women are very important in my life. I need to work for them and deserve my slot in the national team.”

While he had been out of the team for almost 10 years, he admitted he had hoped to play for the “Green – White- Green” but club engagements made it difficult for him to be available.

“I watched the games at home, I felt like I should be there with the boys and contribute,” he said. “Then I have a lot of things to do back home with my family as well as club matters and that’s the reason why I was unable to make it.”

While making an assessment of the African Qualifiers in Group B, the Pomona native noted that he knew from the beginning that things would be tough.

“I knew from the onset it won’t be an easy ride especially the game against the host team,” he reasoned. “It’s difficult coming out to play because they won’t want to lose in front of their home fans. It’s going to be tough games as we continue the qualifying campaign come June.

And Efevberha can’t hide his excitement at the possibility of playing in front of home fans.

“It would be amazing playing back home where I come from. My family will also be happy seeing me do this,” he said. “This will be an opportunity to also bring my sister home coupled with the fact that my other family member will be waiting to see me in Lagos. I am sure it will be fun.”

On D’Tigers chances in the next round, Efevberha points out that he is looking beyond it even as he believes no team should be taken for granted.

“I think we have a very good chance. Nigeria got a lot of talented players around the world. I think we can shine before the whole world. The only team that I will say would be a threat is USA. Although am not scared of playing against anybody but I know USA will be tough,” he explained.

Despite the Nigeria team assembling in Mali before their first practice, Efevberha who had 20 points in the game against Uganda in the Group B opener, followed by another 16 points against Rwanda said the little time to prepare does not give room for the best for the team.

“Being together for three to four weeks will be good, the top talents we really want to bring can change a lot of things if we get to stay together with each other for a while playing matches. That will help us know each other better and make our game plays a whole lot easier for us.”