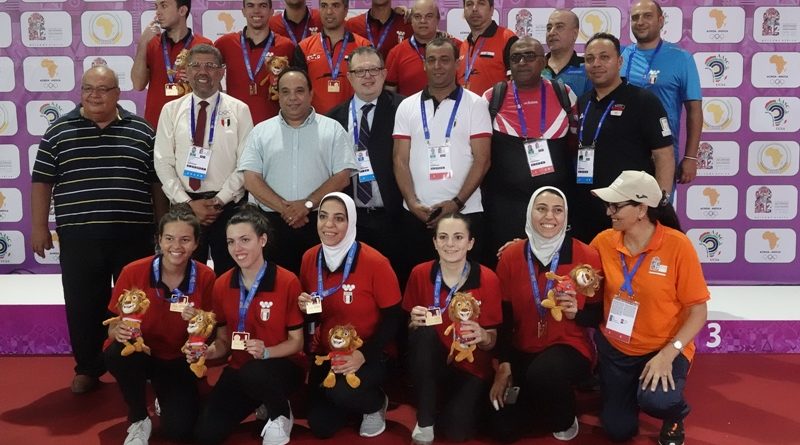 The battle between the bigwigs in African table tennis brought out the best in Nigeria and Egypt at the 12th African Games with Egypt securing the Tokyo 2020 Olympic Games tickets in the men and women events after emerging as the continental champions.

With this development, the Egyptian teams became the first country to berth in Tokyo and was also rewarded with two gold medals to increase the medal haul of Egypt in Morocco.

It was the Egyptian ladies that first secured their slot after beating Nigeria 3-2 in the final. The comeback of the Nigeria team was thwarted by Dina Meshref.

The Nigerian ladies were down 2-0 but spirited efforts from Edem Offiong and Olufunke Oshonaike to put the match at par but the fifth match became the decider when Dina beat Cecilia Akpan 3-0 to hand Egypt the gold medal.

Just like it happened in the women, the same scenario played out in the men as Nigeria had to come from 2-0 down to level up at 2-2.

The sheer determination from Aruna Quadri and Olajide Omotayo restored Nigeria into the match but Omar Assar avoided what played out in 2015 when he dismissed veteran Segun Toriola who is aiming for eight Olympic Games with a 3-0 bashing.

An excited Ahmed Saleh of Egypt described the win as important to the team.

“I am so happy that we were able to achieve our dream of avenging the 2015 loss in 2019 and I think this is the most important match for us because we had prepared very well for it in the last five months. We expected that we will meet Nigeria in the final and we were really surprised with the doubles’ line-up of Nigeria when they paired Aruna Quadri and Segun Toriola because they have been playing with the pair of Toriola and Olajide Omotayo since the start of the tournament. This is very important for us picking the gold medals and securing our place at Tokyo 2020 Olympic Games in Japan,” Saleh said.

For Meshref, the victory was crucial as their efforts in the last few months have been rewarded in Morocco.

She said, “I am personally so excited and for the team we are so excited winning the gold medal and most especially qualifying for Tokyo 2020 Olympic Games in Japan. We really prepared for this match and we knew it was going to be tough even when we were leading 2-0. We had thought we could the match at 3-0 but we had to fight till the end. Nigeria team is not a pushover and we prepared very well for this kind of match because we had expected it. I am so happy that we have now secured our place in Tokyo.”