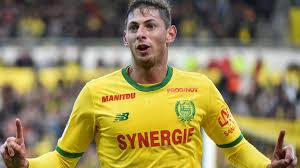 The plane carrying footballer Emiliano Sala has been found and his family have been told.

Wreckage from the aircraft was discovered by a search boat on the seabed of the English Channel on Sunday morning according to a daily Mirror report.

Both Sala and pilot David Ibbotson are missing presumed dead after the Piper Malibu aircraft went missing on January 22.

David Mearns, who headed the search for Sala, tweeted: “Wreckage of the plane carrying Emiliano Sala and piloted by David Ibbotson was located early this morning by the FPV MORVEN.

“As agreed with the AAIB they moved the GEO OCEAN III over the position we provided them to visually identify the plane by ROV.

“The families of Emiliano Sala and David Ibbotson have been notified by Police. The AAIB will be making a statement tomorrow. Tonight our sole thoughts are with the families and friends of Emiliano and David.”

Sala had signed for Cardiff City in a club-record £15million deal from Nantes shortly before his disappearance.

He had put pen to paper with the Bluebirds before flying to France to say goodbye to his old teammates and staff.

But on his planned return to South Wales, the aircraft carrying the forward disappeared from radars.

Cardiff played their first home game since his disappearance against Bournemouth on Saturday, winning 2-0.

And boss Neil Warnock was clearly emotional afterwards, shedding a tear as he applauded the supporters.

“The crowd were amazing all the way around,” said the former Sheffield United manager. It has been a very emotional 10 days. It just got to me in the end. It can’t be helped, can it?

“I thought (the players) were amazing. I thought they were at Arsenal.

“Today wasn’t just about surviving; I thought we played well as well because they’re a decent team Bournemouth.”