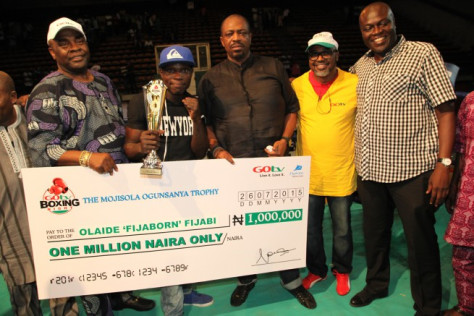 The Director-General, Lagos State Sports Commission, Oluwatoyin Bolowotan, has urged prominent Nigerians to emulate the commitment of Adewunmi Ogunsanya, Chairman, GOtv Boxing, to the revival and growth of boxing in the country. Bolowotan made the call on Thursday while speaking at the closing ceremony of the maiden Lagos State Inter-club Boxing Challenge. The three-day competition, sponsored by Ogunsanya, attracted over 100 male and female boxers from boxing clubs in Lagos State to the Rowe Park Sports Centre in Yaba.

Bolowotan described Ogunsanya as a strong pillar of support for boxing in the country through GOtv Boxing Night, which has revived the sport, and GOtv Boxing NextGen Search, which is consolidating the revival by unearthing fresh boxing talents

Bolowotan said, “Let me use this opportunity to thank the sponsor, Mr. Adewunmi Ogunsanya for his commitment to the growth and development of boxing in Lagos State and Nigeria.”

Ogunsanya also received accolades from Akinsoji Ambode, who is the Chairman, Lagos Amateur Boxing Association, who expressed appreciation for the support towards the successful hosting of the competition, which he said would help replenish the pool of boxers in Lagos and reinforce the bedrock of boxing in Nigeria.

At the end of the competition, Mujeed Yinusa of Supreme Boxing Club was named the best male boxer, while Pelumi Adewale of MCB Boxing Club emerged the best female boxer.

Both boxers were presented with trophies and certificates.