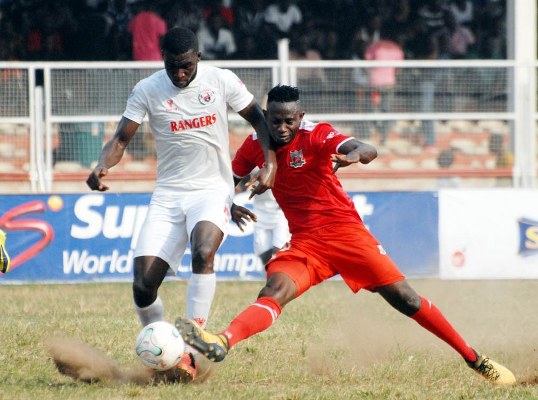 Enugu Rangers players are set to be N1m richer. The players are being rewarded for their 1-0 away win against Heartland in a Nigerian League game played on Sunday, Extrasportsnigeria.com reports.

Enugu State Governor, Ifeanyi Ugwuanyi, had pledged at the start of the season to hand the players N1m reward for each win away from their Nnamdi Azikiwe Stadium, Enugu home turf.

Before the match against Heartland, they had lost their opening two fixtures against Akwa United and Lobi Stars, but shook off all negatives to beat their hosts courtesy of Bright Silas’ 10th minute goal.

It was a heartache game for the hosts as Lucky Emariojoke missed a penalty, while goalkeeper Femi Thomas was also in fantastic form and denied the hosts a number of times.

And as a reminder to the fans of the team the club managers sent out a tweet via their official handle on the promise made by the Governor before the league kicked off.

It reads, “Enugu State Governor will redeem his pledge of cash reward for the players after the win against Heartland. N1m for every win this season.”

It is hoped that the cash could jolt them back to winning ways.