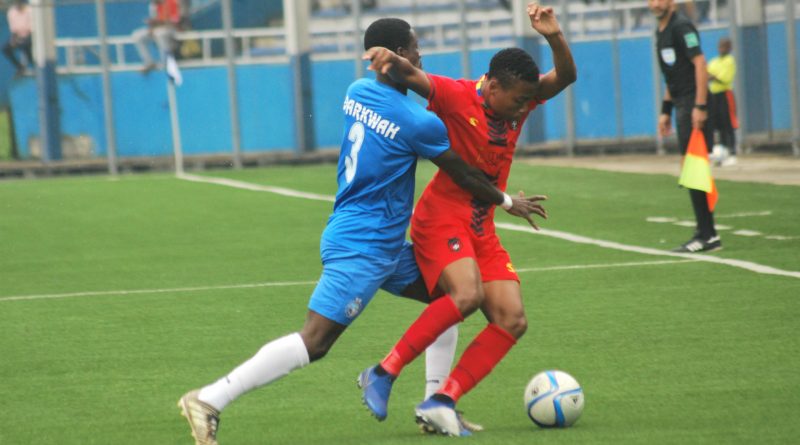 Stanley Dimgba was the star scoring thrice as Enyimba recorded a 4-1 win against Algeria’s Paradou AC in their CAF Confederation Cup clash. The game was played in Aba on Sunday.

Dimgba opened scoring for Enyimba in the 15th minute, with a header off Reuben Bala’s cross at the near post.

The former Sunshine Stars winger then set up Victor Mbaoma for Enyimba’s second in the 35th minute. Dimgba was relentless and added the third goal a minute later, chipping the ball into the net after he was set up by Cyril Olisema.

Enyimba got their fourth goal in the 76th minute, with Dimgba nodding home substitute Stanley Okorom’s cross for his third of the afternoon.

Abdelhak Kadiri pulled a goal back for the visitors a minute from time.

The win means that Enyimba moved to second position in Group D.

Enyimba will host Hasania Agadir of Morocco in their next game in the competition on Sunday, January 26 in Aba.

But it was a different story for Enugu Rangers who were left frustrated in their own Confederation Cup clash.

Rangers and Nouadhibou FC played out a 1-1 draw at the Nnamdi Azikiwe Stadium, Enugu on Sunday evening, a result which does little for either side’s hopes of advancing from the group phase.

Rangers and Mauritanian sides are placed third and fourth respectively, both with two points, in Group A of the competition. They trail third-placed Al Masry of Egypt by four points, while Pyramids FC have qualified for the quarterfinals with a perfect record of four wins from as many matches.

Nouadhibou enjoyed a solid start to the game and were rewarded with a goal midway through the first half, as Yassin El Welly struck an effort beyond the reach of Rangers goalkeeper Nana Osei Bonsu.

Rangers  went into the half-time interval trailing by one goal to nil.

Rangers made a change early in the second half when Chinoso Eziekwe replaced Nnamdi Egbujuo, and they continued to build pressure in attack.

The Enugu side was rewarded midway through the second stanza when they earned a penalty. Ibrahim Olawoyin fired home from the spot kick to make it 1-1 and set up a thrilling finale.

They will return to Confederation Cup action in the last weekend of the month, with both away in Egypt: Rangers face Pyramids in Cairo and Nouadhibou will come up against Al Masry in Alexandria.