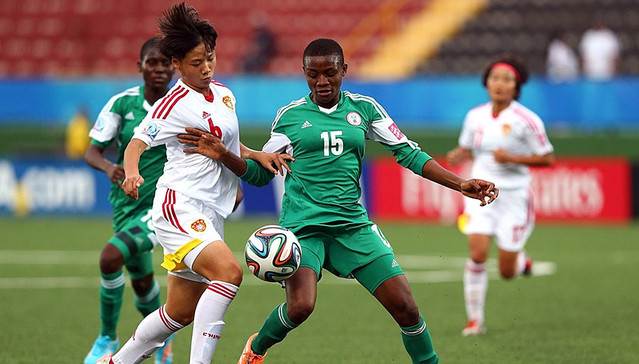 Nigeria’s U17 football girls, Flamingos and their Ethiopian counterparts settled for a 1-1 draw in the second round, first leg of a 2018 FIFA U17 Women’s World Cup qualifying fixture. Accounts from Addis Ababa indicates that the Nigerian ladies faced quite an unfriendly weather in Addis Ababa, but still came off the pitch with the draw.

Joy Jerry put the Nigerian girls in front after 20 minutes as they struggled to cope with the biting weather, and although the hosts created a number of chances, the scoreline stayed that way until the end of the first half.

The cold was said to have affected the Flamingos even more in the second half, and in the 62nd minute, the Ethiopians achieved parity with a free-kick from 35 metres that surprisingly beat goalkeeper and captain Christian Obia.

“The weather did not help matters. Even we adults were uncomfortable; you can imagine what the young ladies were going through on the pitch. Most of them had never gone beyond the shores of Nigeria or experienced this kind of climate before,” Abdulrafiu Yusuf, former Nigerian international and NFF’s Assistant Director (Technical), told thenff.com.

Nikyu said, “The weather did not help but I don’t like to give excuses for my team’s performance. We have to work very hard when we return to Nigeria, ahead of the return leg. We must be more potent in attack and find a way to curtail the Ethiopians.”

The Flamingos will return to Nigeria on Monday.

The return leg comes up at the Samuel Ogbemudia Stadium, Benin City on Saturday, 16th December 2017, with the winner on aggregate to take on the winner of the Cameroon/Algeria fixture in the second and final round of the series. Cameroon defeated Algeria 4-0 away in Algiers on Friday.

The 6th FIFA U17 Women’s World Cup finals will hold in Uruguay 20th November to 13th December 2018. Nigeria’s Flamingos have been at all the competition since it was launched in New Zealand in 2008.