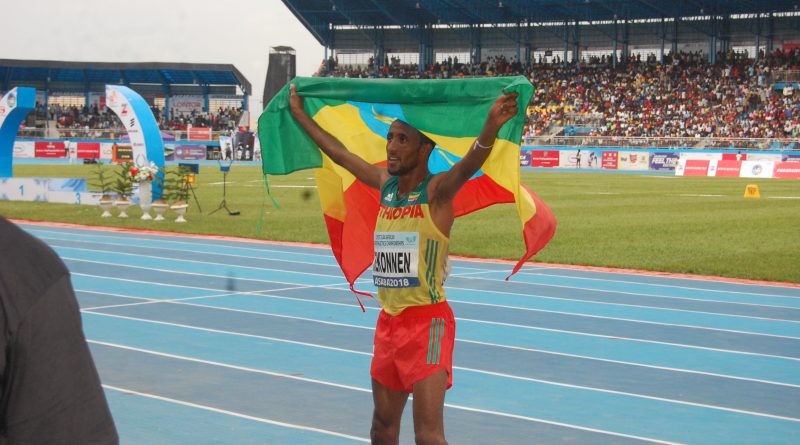 Ethiopia’s Jemal Vimer Mekonnen Wednesday won the first gold medal of the 21st Confederation of African Athletics (CAA) Senior Championships holding at the Stephen Keshi Stadium in Asaba, Delta State. The Ethiopian clocked 29:08.01 to the cheering of fans in the filled up arena.

And it was all theirs as Mekonnen’s compatriot; Andamlak Belihu Berta won the silver at 29:11.09 while Timothy Toroitich of Uganda (29:11.87) got the bronze medal.

The Kenyans who were tipped to win unfortunately arrived in Lagos on Monday evening from Nairobi could not get to Asaba until Wednesday morning, which was few hours to the 10,000m event.

In the women and men’s 100m heats Marie Josee Ta Lou and Akani Simbine set the overall fastest times in both categories respectively.

Blessing Okagbare-Ighoteguonor pulled out of the 100m and 200m women’s sprint events due to injury. Another up and coming Nigerian Joy Udo-Gabriel (11.64) won Heat 3 while Mercy Ntia-Obong (11.66) placed second behind Hamida Basaant of Egypt who won in a time of 11.60 in another heat.

The semi-finals and finals of both the men and women’s 100m will come up Thursday (Day Two) of the competition.