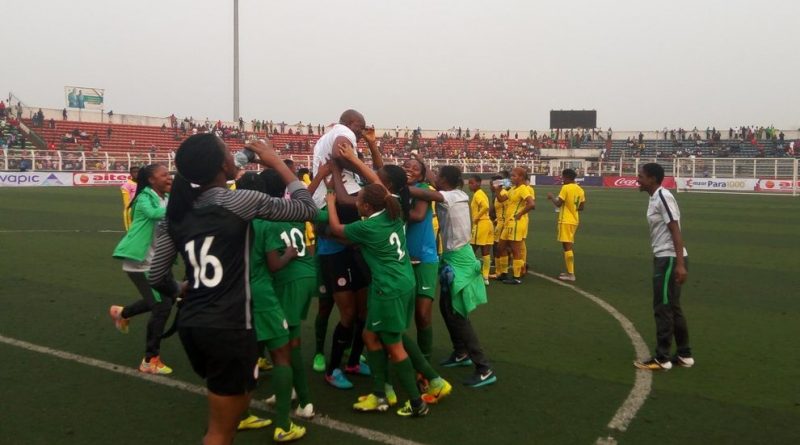 Nigeria qualified for the 2018 FIFA U-20 Women’s World Cup after they flogged South Africa’s Basetsana 6-0 in their second leg, third round clash at the Samuel Ogbemudia Stadium in Benin City, Nigeria on Saturday.

The Falconets scored four goals within 26 minutes and led 5-0 after only 32 minutes, then struck once in the second half to qualify 8-0 on aggregate. Nigeria defeated South Africa 2-0 in the first leg a fortnight ago on their home soil. In spite of the bold talks of the South African managers before kick off in Benin on Saturday followers of the game of football in Africa were certain the Falconets would win. What they may not have known is that the margin would this wide.

Gift Monday set the ball rolling with her second of the competition after five minutes and Ajibade scored her ninth and 10th goal, as the shell-shocked Basetsana were totally outclassed.

Monday’s impressive display ended on a sour note as she was given the marching orders for a second caution.

Coach Danjuma’s ladies were a class apart as the few South African fans sportingly applauded as Nigeria join Ghana as Africa’s representatives in the competition billed for France between August 5 and 24, 2018.