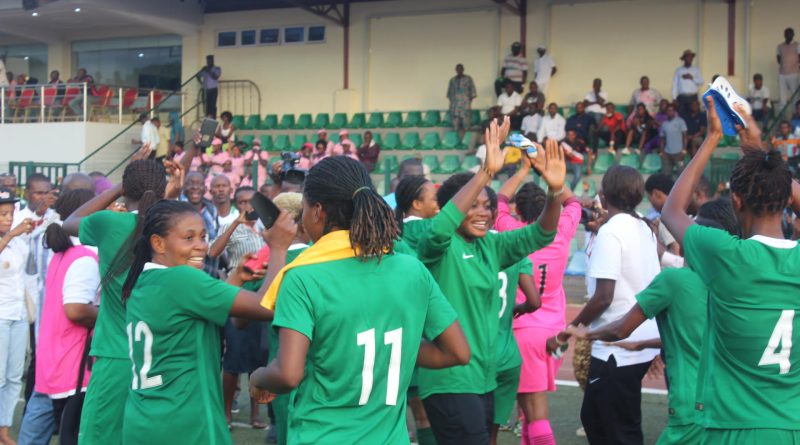 First Vice President of the Nigeria Football Federation, Seyi Akinwunmi has declared Tuesday’s win over Cameroon as justification by the Super Falcons of the NFF’s confidence in the team. The win gave the Falcons ticket to the FIFA World Cup and the Women’s AFCON final.

He said, “I feel elated, and I am sure that my colleagues on the Board of the NFF will feel the same way anywhere they are presently. The NFF has always had confidence in the Super Falcons and we are happy we got this World Cup ticket.

“It was not easy and it could not have been easy, as that was a semi final match (against Cameroon). The Cameroonians were the hosts in 2016 when we beat them in front of a capacity crowd to retain the trophy, so they came with every ounce of strength and tactical knowledge to try and gain revenge. But champions would always be champions and we overpowered them.”

Akinwunmi gingered up the Falcons with inspiring words at lunch on Tuesday before the team departed for the Accra Sports Stadium, and the players admitted after the game that his charge to them to go and conquer, and expression of faith in them to retain the trophy for Nigeria, kept ringing in their ears even when the going got tough.

On the preparation for the 2019 FIFA Women’s World Cup finals in France, the Chairman of Lagos State Football Association and Member, CAF Youth Competitions Committee told thenff.com that there would be no half measures.

“The FIFA World Cup is the FIFA World Cup, and we must put in place a proper and comprehensive preparatory programme for the Super Falcons. We must utilize all the available FIFA windows for the team to play friendlies.

“After the final match on Saturday, the NFF will ask Coach Thomas Dennerby to submit his programme and we will take it from there.”

Nigeria is one of only seven countries in the world that has qualified for all the editions of the FIFA Women’s World Cup since the championship was launched in China in 1991. The others are the United States of America, Germany, Sweden, Brazil, Norway and Japan.

Falcons will be joined in France by South Africa’s Banyana Banyana, who they meet in the Women AFCON Final in Accra on Saturday, as well as the winner of the third place game between Cameroon and Mali.