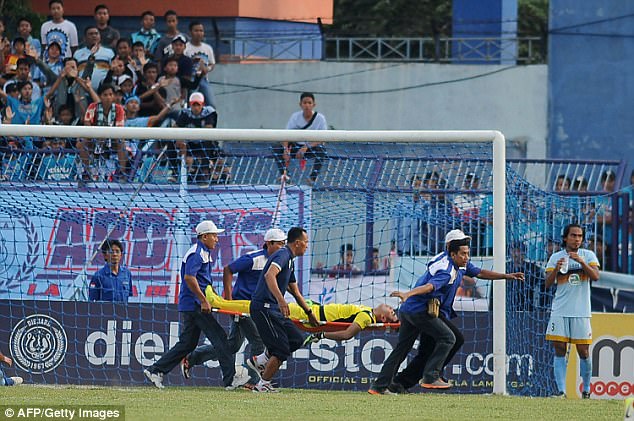 Friends and family members of a legendary Indonesian goalkeeper gathered for a funeral after the footballer died during an on-field collision with a team-mate, the Mailonline reported on Monday.

The 38-year-old was pronounced dead at the Regional General Hospital in Lamonga. Following his death, friends and family gathered around his casket later on Sunday to perform funeral prayers.

Indonesian football continued to mourn Huda on Monday. Huda collapsed just before half-time after Sunday’s accidental clash with Brazilian midfielder Rodrigues. The goalkeeper was declared dead at 5pm local time, surrounded by the Persela squad who were with him at the hospital.

Doctors said he stopped breathing and suffered a heart attack.

“He received an emergency treatment for a few minutes in the hospital but he could not be saved. He died before 5:00 pm yesterday,” Persela’s assistant coach Yuhronur Efendi told AFP.

Persela head coach Aji Santoso confirmed afterwards that he had died at hospital and said his passing had impacted the team hugely.

“All of the players finished the game and went to the hospital, where it was announced that Choirul Huda had died. The loss of Choirul Huda has hit us all hard. We did not have time to a see a doctor, only to see his body.”

Doctors said the medical team tried to revive the veteran Huda, a former fringe player in the national set-up, for about an hour.

Huda suffered possible neck and head trauma from the impact to his chest and lower jaw after he dived at the feet of on-rushing players and was caught by the legs of Rodrigues.

His fellow players had gone to straight to the hospital after the final whistle following their 2-0 win over Semen Padang and supporters later went to his house with candles, according to local media reports.

On their official Twitter page, Persela carried ‘farewell cap’ above a photo of Huda.

Huda leaves behind a wife and two children.