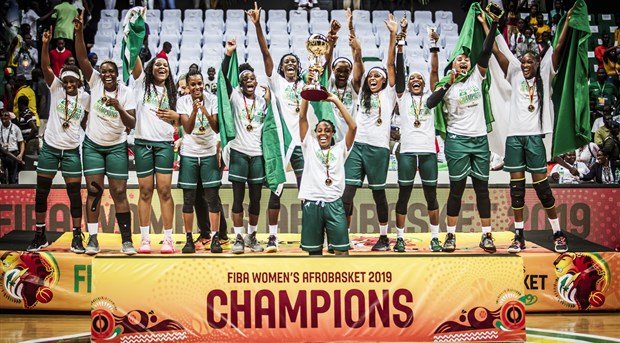 Nigeria defeated Senegal 60-55 in a thrilling 2019 FIBA Women’s AfroBasket final match played in Dakar on Sunday. It was their second straight title for D’Tigress against Senegal and a superb back-to-back achievement for the lovely Nigerian ladies.

The vociferous Senegalese fans who filled up the magnificent 15,000-seater Dakar Arena could not halt the dominance of the Nigerian women who also defeated the other continent powerhouses in 2017 in Mali to win the trophy.

In Dakar 2019 D’Tigress registered a perfect five-game unbeaten run as Nigeria won their fourth African title. In Mali it was an 8-0 run for Nigeria.

Otis Hughley Jr and his side ensured that Nigeria become only the second team to defend their title having won it in 2003 and defended it at home in Abuja in 2005.

Nigeria started the game with huge hits with half time break result at 32-24.

“We have been here before. We prepared ourselves as though every game would be like this. It is just that the previous games did not give us live training outside of playing ourselves so when that came, we had already been programmed. It is entrenched in our DNA to be ready for a tight game, make smart decisions and take care of the ball and that is what we did,” Hughley Jr told FIBA.com.

Ever consistent Evelyn Akhator scored 14 points and made nine rebounds and her amazing performance throughout the tournament earned her a place in the Tournament Five.

Her teammate Ezinne Kalu will smile her way back home after being named the undisputed TISSOT MVP as she joined Akhator in the Tournament Five.

Astou Traore stood out for Senegal with 13 points and six rebounds to earn her place in the Tournament Five deservedly so.

Earlier in the day, Mali saw off Mozambique 66-54 to win bronze for the second edition in a row much to the distress of the southern Africans who put in a good shift this tournament.