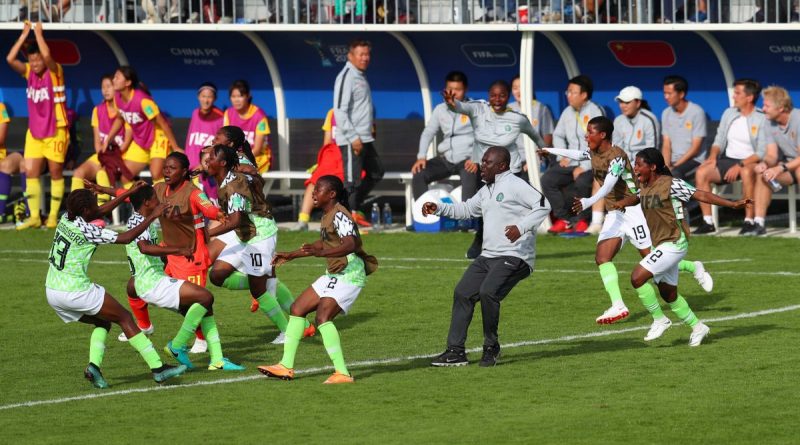 Nigeria’s stand-in Captain Rasheedat Ajibade was the heroine as the country’s U20 girls weaved their way into the 9th FIFA U20 Women’s World Cup quarter finals after a 1-1 draw with their Chinese counterparts. The game was played in Dinan/Léhon on Monday evening.

The Falconets’ top scorer in the African qualifying series tapped in at the near post in a last-gasp effort from a cross by Aishat Bello, to break Chinese hearts and shoot Africa’s most successful women’s football team at the World Cup level to their seventh berth in the knockout stages in nine editions of the FIFA U20 Women’s World Cup finals.

Zhang Linyan gave China the breakthrough they needed with a 41st minute goal, and they were on their way to the last eight until Ajibade’s strike which ensured the Falconets finished Group D in second place on goals balance from the Asians, though on same number of points (four). Germany finished top of the pool with maximum nine points.

The Falconets will now take on Spain in the tournament quarter finals.

General Secretary of the Nigeria Football Federation, Dr. Mohammed Sanusi, praised the ladies for their effort.

He said, “The Falconets deserve commendation for the way they fought all the way to the end and got the important goal. The NFF is proud of their dedication, discipline and commitment, and we believe they have what it takes to overcome Spain in the quarter finals.”