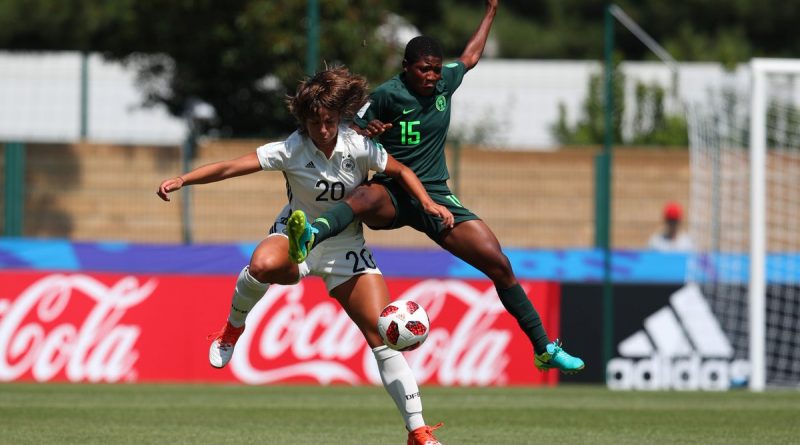 Nigeria’s U20 girls, Falconets, were unable to break the German jinx as they lost 1-0 to the 2010 and 2014 champions in the opening game of Group D of the FIFA U20 Women’s World Cup in Saint Malo on Monday.

Stefanie Sanders was gifted acres of space in the six-yard area to slam into the net from a corner kick even after inspired goalkeeper Chiamaka Nnadozie had made two consecutive saves.

The Falconets, runners-up in 2010 and 2014 and semi finalists in 2012 had their own opportunities to get on the scoresheet but Anam Imo and Peace Efih were somewhat unlucky.

The Falconets turned out in Nigeria’s new Nike outfits on the turf of Stade de Marville. Germany pushed hard and relentlessly in the opening half, but could find no breakthrough as a brilliant Nnadozie, with defenders Glory Ogbonna, Oluwakemi Famuditi and Sunday Opeyemi, kept things tight at the rear.

Nigeria should have levelled three minutes after the Germans shot ahead, but Efih’s swerving shot rocked the upright with the goalkeeper stranded.

“The girls fought very hard and deserved at least a point from this match, but that is gone now and we have to look forward to Thursday. I believe the coaches have the ability to turn things around and ensure victory in the two remaining group phase matches,” Yusuf Ahmed Fresh, Chairman of the NFF Technical and Development Committee, told thenff.com on phone from Saint Malo after the match.

Next up for the Falconets is an encounter with their Haitian counterparts, at the same venue on Thursday, before another potentially –explosive encounter with China in Dinan/Léhon on Monday next week.