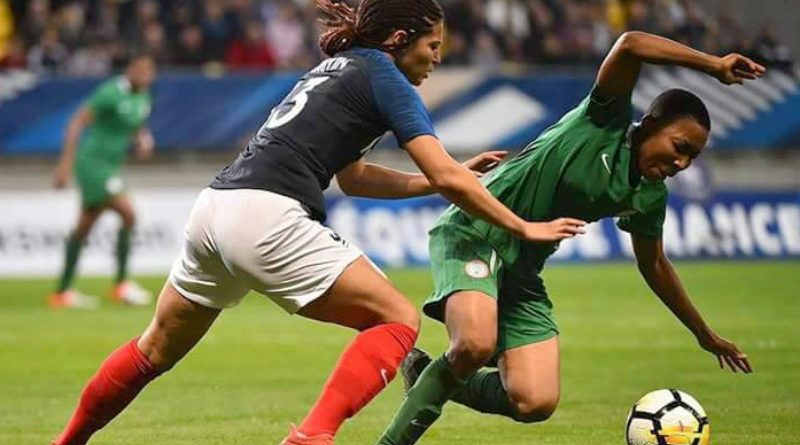 Super Falcons were battered 8-0 by France in a friendly game played inside the MMArena in Le Mans, France on Friday.

It was indeed a fire baptism for the new Swedish coach Thomas Dennerby’s who was playing the first game with the main team of the African champions.

France broke the deadlock after 20 minutes through Eugenie Le Sommer after they had opened up the Falcons defence and from then the goals came in torrents. In the 26th minute Falcons Ngozi Ebere received the game’s first yellow card for a foul and the obviously better prepared French side continued to create opportunities and were rewarded in the 36th minute as Valerie Gauvin made it 2-0.

On the stroke of half-time, Falcons conceded again as Gaetane Thiney stretched France’s lead to 3-0 going into the break.

And more goals would surely come. Hope came for Nigeria in the 54th minute when Desire Oparanozie hit a well struck shot but was denied by a good save by the French goalkeeper.

The French recovered easily from Oparanozie’s shot as Aminata Diallo extended their lead in the 60th minute before Gauvin grabbed her second goal in the 70th minute to give her side a 5-0 lead. At that point fans of the African champions thought the goals would dry up but the French girls were far from being satisfied. And with 12 minutes left, Gauvin completed her hat-trick to give the French a 6-0 lead.

The French were not done as they bagged their seventh goal with five minutes left following an own goal by Faith Ikidi. And just as the spectators were leaving in the 92nd minute, Marie-Charlotte Leger completed the rout.

Last year, the French also trounced Ghana 8-0 in another friendly.

The friendly is part of preparations for the Falcons ahead of the 2018 Africa Women’s Cup of Nations qualifiers according to the Nigeria Football Federation.

France defeated Nigeria 1-0 in their first group stage game at the 2011 FIFA Women’s World Cup in Germany. They did not meet again until Friday night.