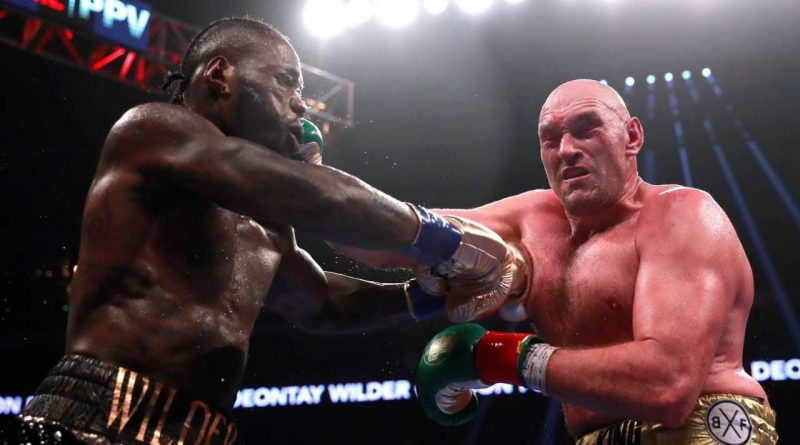 Tyson Fury beat Deontay Wilder in seven rounds to claim the WBC world heavyweight title, but his victory in Las Vegas was laced with a secret message to Anthony Joshua, after pictures emerged of the Brit wearing a gum shield with the word ‘Nigeria’ written across the front, in the colours of the Nigerian flag.

Anthony Joshua is proud of his Nigerian heritage, and is frequently seen donning both the British flag, and the Nigerian flag.

Joshua’s parents were both born in Nigeria, and they moved to the UK when they were 25, The Express reports.

The boxer was also born in Nigeria, and commonly visits the country. His last visit in February saw him visit the African Shrine followed by a massive reception in Sagamu, his place of birth.

Fury’s decision to wear the gum shield, which also had the word ‘Nigeria’ written across the front of it, may be a subtle way of calling out Joshua.

Fury was spotted wearing the gum shield during the fight, as well as after.

His dominant, and meteoric, win over Wilder has led to speculation that both Fury and Joshua could launch a major unification bout.

While Wilder may still call for a rematch with Fury – which he’d be obligated to accept – Hearn admitted that there’s unlikely to be a better time for the two heavyweights to meet in the ring.

“I’ve already spoken to AJ and he wants to go into this fight next,” Hearn told talkSPORT.

“We have to make this fight happen.

“We will never, ever get the chance for two Brits to fight for an undisputed heavyweight world championship.

“I promise you we will do everything we can to make this fight. It has to happen.”

Hearn also claimed that nobody wants to see a third fight, and he hopes Wilder takes some time to reflect on the defeat.

“I don’t think anyone wants to see a third fight because it was that conclusive,” he added.

“But, we will see if he exercises that clause.

“I probably expect Wilder to do that – I don’t see where else he has to go.

“But our mandatory challenger, Kubrat Pulev, is also promoted by Bob Arum, like Tyson Fury.

“So, there is a very easy manoeuvre there if Wilder doesn’t accept the rematch to go straight into this undisputed fight in the summer.

“That is what we have to push for initially.”

Fury beat Wilder by stoppage, after the American’s corner decided to throw in the towel in the seventh round.

The Brit’s victory was largely attributed to a brutal right hook in the second round, which appeared to burst Wilder’s eardrum.