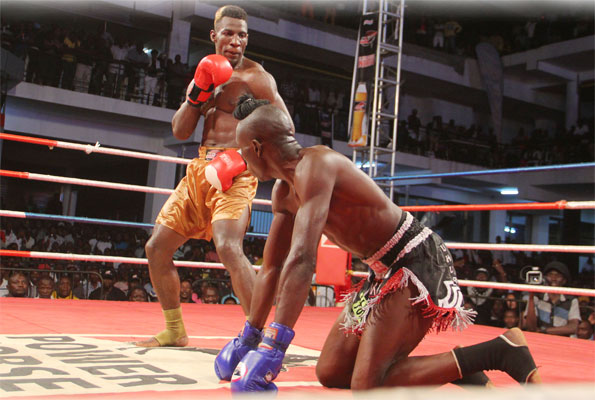 Nigeria’s Olaide “Fijaborn” Fijabi will now fight Tanzania’s Shadrack “Punch to Punch” Kobero for the vacant African Boxing Union (ABU) light welterweight title at the GOtv Boxing Night 13. The fight is scheduled to hold on 26 December at the Landmark Centre, Victoria Island, Lagos. Kobero was, on Sunday, approved by the ABU to replace Kenya’s Michael “Tyson” Odhiambo, who has been forced to pull out of the contest by a wrist injury suffered in training, the fight promoters told Extrasportsnigeria.com.

Kobero, an equally experienced boxer, is 24 years old, has had 14 fights, winning eight by knockout. He will be meeting Fijabi, another knockout specialist, in a fight that promises to be explosive. Speaking from his base in Dar es Salam, capital of Tanzania, Kobero said he has been training and hoping for a chance to fight before the end of the year.

“I am happy for this opportunity and I am sure of making it count. Fijabi will be meeting his master. I am not coming to Nigeria for a vacation. I am coming to win,” he said.

The event, which will see musical performances by Small Doctor, Falz, Simi and Reekado Banks, will feature six other fights, including for the ABU lightweight title between Nigeria’s Oto “Joe Boy” Joseph and Egyptian champion, Abdulrahim Ahmed. Abolaji “Afonja Warrior” Rasheed will defend his West African Boxing Union title against Arye Ayitteh of Ghana, while Rilwan “Baby Face” Babatunde will seek to win the national lightweight title when he takes on Chijioke “Painless” Ngige.

Also in the lightweight category, Jimoh “Hogan Jimoh Jnr” Lukman will face Rilwan “Scorpion” Opatola, while Rilwan “Real One” Oladosu will square up with Kehinde “Ijoba” Badmus. In the middleweight division, Matthew “Wizeman” Obinna will clash with David “Cosmos” Awosika.

The best boxer at the event will go home with N2.5million, while the runners-up will win N1million and N500,000 respectively.