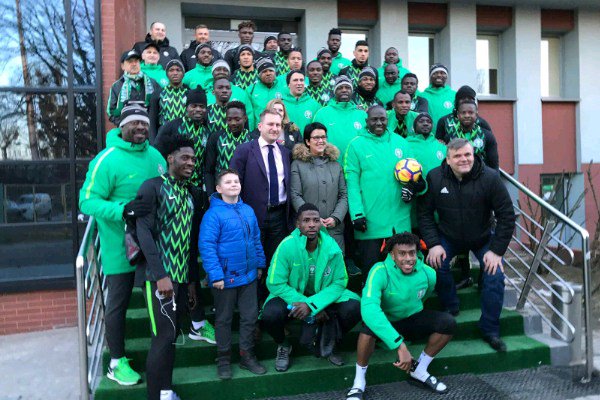 Governor Ifeanyi Arthur Okowa of Delta State has again bountifully rewarded the Super Eagles following victories in their 2019 AFCON qualifying match against Seychelles and the friendly against seven-time African champions Egypt. He presented a gift of $10,000 to coach Gernot Rohr and another $50,000 to the team on Tuesday.

Thenff.com recalls that Okowa similarly rewarded the team following their qualification for the 2019 AFCON with the 1-1 draw against South Africa in Johannesburg in November 2018, which they followed up with a friendly against Uganda in Asaba three days later.

Captain Ahmed Musa, who on his part received rave reviews for promptly fulfilling his promise of N1million-a-goal to the Olympic Eagles by sending the team N4million on Monday evening immediately after their 4-0 win over Libya, thanked the Governor for his kind gestures and support to the team, other national teams and Nigerian Football generally.

At its meeting on Monday, the NFF Executive Committee had hailed Delta State’s number one citizen and his administration for full sponsorship of the Super Eagles’ two matches, as well as augmenting for the U23 AFCON qualifier between Nigeria and Libya.

At its Monday meeting, the NFF Executive Committee also approved that the Super Eagles play two more friendly matches during the FIFA window in June as part of the preparations for the 32nd Africa Cup of Nations in Egypt this summer.