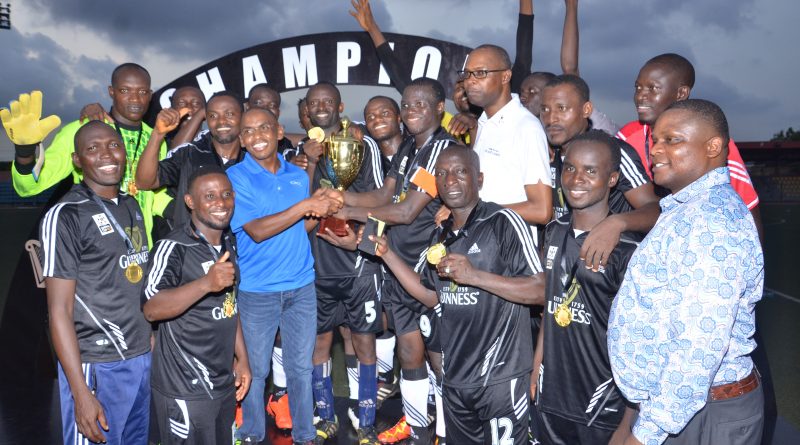 The grand finale of the 2017 edition of Guinness Cup has held the. Guinness Cup is an employee competition that fosters team spirit and celebrates employees’ prowess in a range of sporting activities. This year’s edition of the competition featured games such as football, volleyball, scrabble, draughts and table tennis. The tournament began with preliminary games and culminated in a high-profile final which held at the Agege Stadium in Lagos.

He said, “I look forward to the Guinness Cup every year because it presents a unique platform for all Guinness Nigeria employees to have a great time, and celebrate life together in line with our purpose.

“Sport is not just a physical activity that produces a winner and the loser. Rather, sporting activities present a unique opportunity to celebrate the best qualities of the human spirit. Qualities like: resilience, teamwork, adaptability, creativity, stamina and the determined pursuit of excellence. I am therefore delighted to enjoy the finals but also recognise employees who are participating in various games.”

He said, “Every year, employees look forward to the range of exciting games played at the Guinness Cup; one unique proposition of this competition is that it gives us an opportunity to discover the impressive sporting talent we have in our organisation. This year’s competition has been no exception; we have seen our colleagues excel in fields we do not know them for. For instance, we have seen marketers display impressive football skills; and watched IT professionals play tennis with such dexterity. This couldn’t have been possible without Guinness Cup.”

Team Benin emerged overall winner of the football tournament beating the Lagos team to clinch the coveted trophy for the first time in three years. In scrabble, Godspower Amavah, a member of the Lagos Team emerged winner. For, volleyball, which was played by female employees, Team Baileys emerged champions after seeing off Team Snapp. In the draughts category, Michael Orkula, a member of the Benin Team beat Oluwole Ajiboye of the Lagos Team. In the table tennis competition, Osayawe Kizituu won the male category while Ifeoma Anthony, emerged the winner in the female category.

Speaking on behalf of the Benin team, Mr Kingsley Imade, Site Director, Benin Plant, said the Benin football team’s victory was a well-deserved honour after the team had endured two consecutive defeats in the competition last year and the year before.

He said, “We are thankful to the management for providing the right platform for all employees to express themselves, especially through sports. I would like to commend the management for creating a convivial environment where talent is not only being developed, but one in which employees’ value one another, and performance is recognised and celebrated.”

Guinness has continued to consolidate its passion for sports promotion and talent development in Nigeria. This position has been strengthened over the years through the sponsorship of the national football team and various football events such as Every Minute Made of Black unveiling of the World’s Largest Jersey, among others.