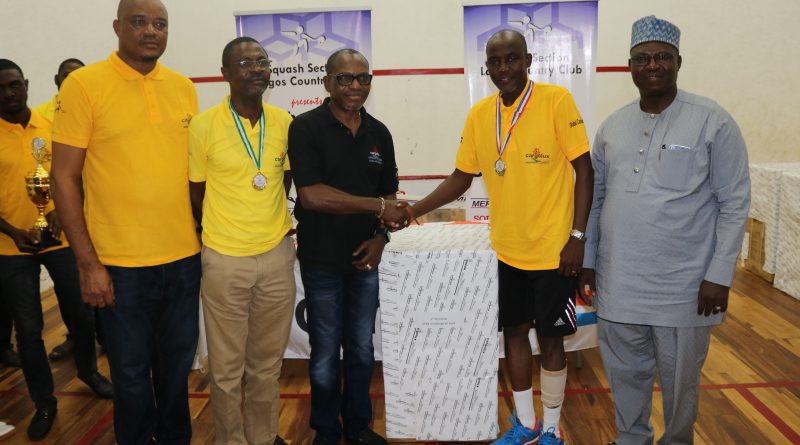 Haniel Hardison’s name has become quite synonymous with the Cargolux Squash Tournament. And it has been so for just a simple reason, Extrasportsnigeria.com reports. He has won the tournament over and again and doesn’t look ready to let go.
The 13th annual Cargolux Merchant Express Squash Tournament, which served off two weeks ago at the Squash Section of the Lagos Country Club, Ikeja, came to an exciting end on Saturday with Hadison of Lagos Country Club dominating once again.
The defending champion, Hadison, who has won the tournament seven times in the past, brushed aside stiff opposition from last year’s runner-up Dele Obasuyi of Benin Club 3-1 to cart home the top prize in the Men’s Open category.
Hadison was in his elements throughout the event as he also defended his title in the Closed Men’s category, beating Bunmi Akpata in the final. Mike Adegoke emerged champions in the Veteran’s Closed category after seeing off the challenge of Deji Sule in the final.
Even while clutching his trophy, Hadison revealed his regret at not becoming a professional squash player. He pleaded with Nigerians to stop viewing the game of squash as an elite sport and urged the Nigeria Squash Racket Federation to focus their attention on the grassroots development of the game so as to attract the younger generation.
He said, “I’m happy I defended my trophy, I’ve won a few editions now and credit goes to the almighty God.
“I started playing much younger, from age group, U16, U19 and then stopped there. I was once the U19 national champion but I couldn’t go further to the professional level due to the job I got. Squash is the only thing I know how to do best but it’s too late for me now to go professional.
“Squash is seen as an elite sport but now people like me are changing that perspective. My advice to the federation is to go back to the grassroots, secondary schools and create awareness. We also need the media to help us to project this sport.”
In other games, Mike Nwabuzor of Ikoyi Club beat Layo Olupitan to win the prize in the Veteran’s Open category while Busayo Olatunji of Lagos Country Club defeated Faidat Saliu of Kwara Club to win the U19 Women category. Adegoke Onaopemipo beat his fellow Lagosian Ayomide Oladipupo to win the U19 Men’s category.
The Chairman/CEO Cargolux Merchant Express, Captain Shina Akinfeyiwa, assured the guests their readiness to continue bankrolling the competition, while the Chairman, Squash section of Lagos Country Club, Funmi Bamkole praised the sponsors for their effort and commitment in sustaining the game for the past 13 years.
The president of Lagos country club Tajudeen Adegboyega Akande, while presenting Akinfenwa with a meritorious award, thanked him for his support for squash development in Nigeria which he said is unparalleled.
He said, Thank you for supporting this event. In this period of recession, sponsoring an event of this magnitude is no mean feat; it is a demonstration of your commitment and love for sports.”
16 clubs, including seven from outside Lagos participated in this year’s edition of the tournament, with winners in different categories awarded trophies, medals, cash and other exciting prizes like washing machines and home theatres.