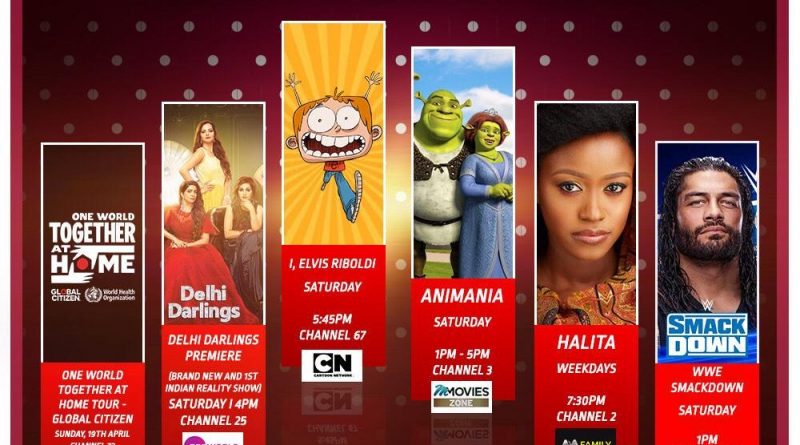 Catch Halita S2 episode 5 on AM Family (channel 2) Friday, 17th April at 7:30pm. Kaza and King get a rude shock and tempers flare between Dosha and Afrah, bringing things to a head. Altine comes up with a new strategy for Bobby.

Brand new for the kids I, Elvis Riboldi on Cartoon Network (channel 67). This cartoon series will recount the daily adventures of an energetic, scatter-brained, impulsive, reckless an slightly destructive boy named Elvis. With his friends Boris and Emma, Elvis takes on whatever happens in his smallish home city of Icaria Premieres Saturday, 18th April at 5:45am.

Wrestling fans can enjoy the WWE SmackDown 2020 airing LIVE on SuperSport Select 5 (channel 36) this Saturday, 18th April at 1am.

Brand new show alert! Zee World (channel 25) brings you its first ever reality show from the Indian shores called Delhi Darlings. This reality show gives viewers a glimpse into the glamorous lives of ten super rich socialites from Delhi. And whoever said too much bling is a thing obviously didn’t know what they were talking about. Weekends at 4pm, starting Saturday, 18th April.

Do you admire wildlife? Dead By Dawn is showing on National Geographic Wild (channel 47). Witness the wild horror that animals must face once the comforting light from the sun fades into the darkness, that brings death. Sunday, 19th April at 5:45pm.

Global Citizen’s One World: Together At Home airs on Sunday 19th April on FoxLife (channel 20) at 2:50pm, E! Entertainment (channel 26) at 5pm and MTV Base (channel 72) at 8pm.  The special broadcast will celebrate and support health care workers and the COVID-19 Solidarity Response Fund for the World Health Organization and will feature performances by different artistes including Lady Gaga, John Legend, Jennifer Lopez, Billie Eilish, Burna Boy with appearances by Oprah Winfrey, Chris Martin, Idris & Sabrina Elba and David Beckham amongst others. There will be a repeat broadcast on Monday, 20th April at 3:30pm on BET (channel 21).