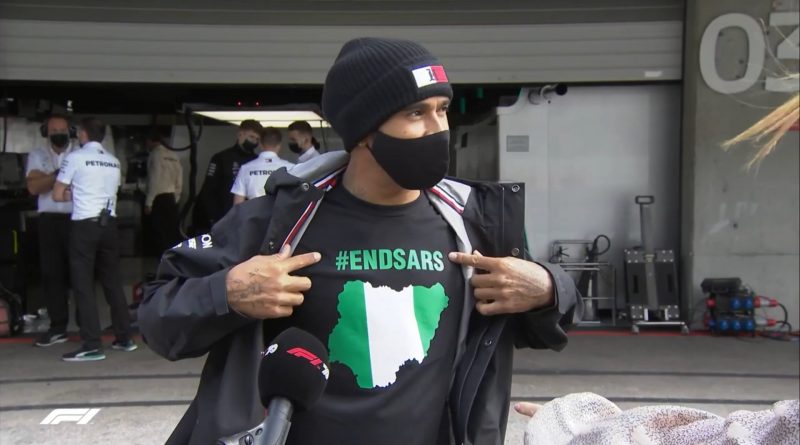 Lewis Hamilton passed Valtteri Bottas to take a commanding victory in the Portuguese Grand Prix and break Formula 1’s all-time win record. The Sunday super victory was made very emotional for Nigerians when the Brit celebrated with a t-shirt specially designed with the #EndSARS logo.

Nigeria has been economically been on standstill in nearly straight weeks as hundreds of thousands of people protested police brutality and bad governance on the streets across many parts of the nation. The protests which has spread across different world cities has seen many young Nigerians shot and killed by the police and government agents.

According to the BBC report, Hamilton dropped to third in a manic first two laps that ended with McLaren’s Carlos Sainz leading, but fought back to crush Bottas’ hopes.

After both Mercedes passed Sainz, Hamilton tracked Bottas before taking the lead on lap 20.

From there, Hamilton dominated to take his 92nd career Grand Prix victory.

Hamilton received a standing ovation from the socially distanced crowd, before celebrating with team members and then a long embrace with father Anthony.

Hamilton said he “owed it all” to his Mercedes team, adding: “I could only ever have dreamed of being where I am today.

“I didn’t have a magic ball when I chose to come to this team and partner with these great people, but here I am.

“Everything we do together – we are all rowing in the same direction and that’s why we’re doing what we’re doing.

“And my dad’s here and my step mum Linda, and Roscoe (Hamilton’s dog). It is going to take some time for it to fully sink in. I was still pushing flat out as I came across the line. I can’t find the words at the moment.”