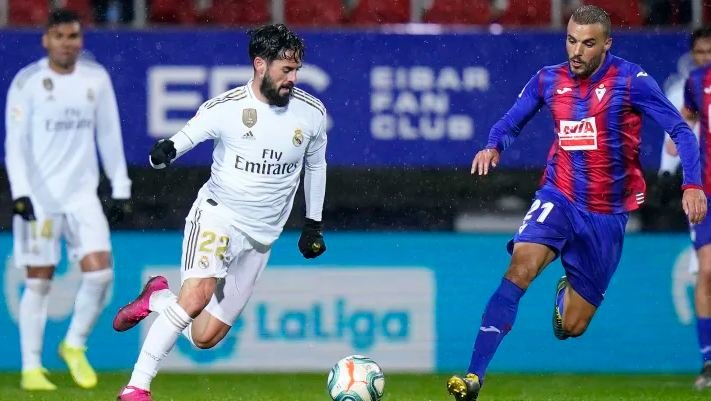 Eden Hazard impressed as Real Madrid defeated Eibar 3-1 on Sunday in their first LaLiga match since the resumption.

Toni Kroos, Sergio Ramos and Marcelo eased Madrid into a comfortable half-time lead, with the visitors’ second-half improvement yielding nothing but a Pedro Bigas consolation.

With Barcelona having won 4-0 at Real Mallorca a day earlier, the pressure was on Los Blancos to follow suit and close the gap at the top of the table back to two points.

Madrid’s home games are being held at the Castilla’s Alfredo Di Stefano Stadium while the Santiago Bernabeu undergoes renovation work, but the change in venue made little difference as the home side marked Zinedine Zidane’s 200th game in charge in winning fashion, according to the Goal report.

Kroos broke the deadlock in the fourth minute with a sublime first-time strike from just inside the box that looped beyond goalkeeper Marko Dmitrovic.

Eibar responded well but were 2-0 down after half an hour. Ramos stepped out to intercept a pass and spark a swift counter-attacking move that ended with the Madrid captain tapping in an unselfish square ball from the impressive Eden Hazard, who was back in the line-up for the first time since February after recovering from an ankle fracture.

Thibaut Courtois saved superbly from Edu Exposito and Sergi Enrich hit the bar with a header, before Pablo De Blasis’ shot deflected off Bigas and bobbled beyond Courtois to give Eibar a lifeline.

Eibar are just two points above the bottom three, having won just once in eight league matches.

Rodrygo started the match, Gareth Bale and Vinicius Junior came on, Isco, James Rodriguez and Marco Asensio stayed on the bench, and we are still unclear who is Madrid’s best option on the right wing.