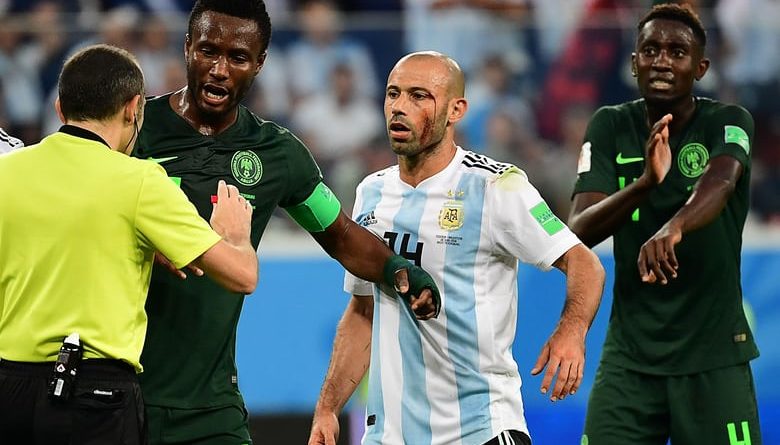 Nigeria captain Mikel Obi has been left disappointed with the referee from Turkey after the Super Eagles were denied a penalty in the Group D match against Argentina in Saint Petersburg which the South Americans won by 2-1 on Tuesday, Extrasportsnigeria.com reports.

The teams were at that stage tied at 1-1 with Nigeria just needing a draw to progress to the Round of 16 when Argentinean defender Marcos Rojo headed the ball onto his own arm in the penalty area.

The serious appeals made by the Nigerians forced a reluctant referee Cuneyt Cakir to consult VAR for a definitive verdict, before ruling against a penalty kick.

When reporters raised the issue with Mikel at the post-match press conference he said, “I don’t understand how that wasn’t a penalty. For me, it was a clear handball. If you look at the game yesterday, I think it was Portugal, that wasn’t even close to this. This was even worse – very open. He headed the ball and it hit his hand.

“Maybe because the referee had given the first penalty, he didn’t want to give the second one. But a penalty is a penalty. If it’s a penalty, you can still give a penalty. We’ve seen it again in the dressing room, it was a clear penalty. There wasn’t any way the referee could not give that.”

And not long afterwards, Rojo hit a volley off a Gabriel Mercado’s cross in the 86th minute to send Argentina through to the next stage with a 2-1 win. They will now face France in the next stage.