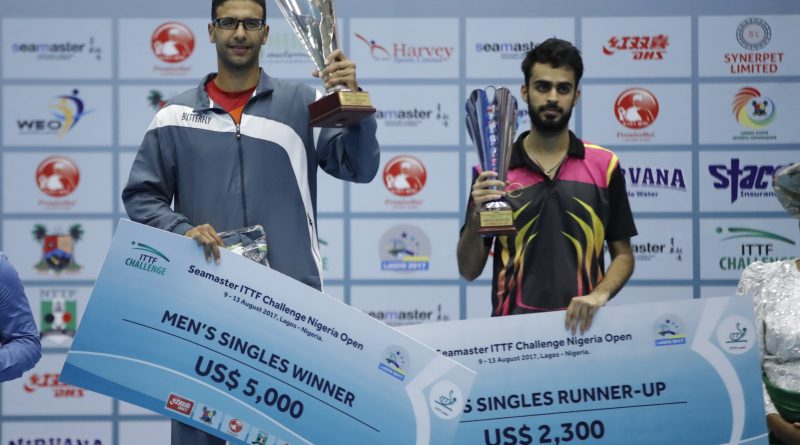 Egypt’s Omar Assar believes Lagos fans played a crucial role in his triumph at the ITTF Nigeria Open that ended on Sunday at the Teslim Balogun Stadium and says he is hugely indebted to them. He says he is amazed by the support he always enjoys whenever he is playing in Lagos.
The Egyptian who made history as the first player to win the men’s singles title thrice as well as unbeaten in all his participation in the tournament is eager to return to Lagos again for the competition.
For the 2017 trophy, Assar beat India’s Sarthak Gandhi in the final 4-0 (11-6, 13-11, 11-6, 11-8). With the win, Assar maintains his perfect record in Lagos, having now won the tournament on each occasion he has played.
He said, “I feel very wonderful wining this competition again. This competition has been very special to me because of it being played in Lagos. The fans in Lagos have been very supportive in me claiming the title. So I need to ensure I play very well because many people are waiting to see me winning the title. From the start of the tournament, there have been a lot of improvements among the Nigerians and Egyptians, while I am particularly thrilled with the performance of the Indians.”
Assar, who is Aruna Quadri’s partner in men’s doubles, believes the Nigerian would return stronger following his round of 16 exit.
“Aruna and others played really well. I am always proud whenever Aruna and I play in the final of any major event because it helps to promote the sport in Africa. Aruna is a very good player and I am sure next he will make a comeback and have better competition next time.”
Dina Meshref ensured Egypt grabbed the single titles by defeating Russia’s Olga Kulikova in the final of the Women’s Singles. It was a 4-0 (11-4, 16-14, 12-10, 11-6) victory for Meshref, who dropped only two games during the event. It was the Egyptian’s third attempt at the title, and it turned out to be third time’s lucky, having made the quarterfinal in 2014, and final in 2015.
As Africa’s number one player, she kept continental pride and made sure the title stayed on home soil for the first time in the event’s history.