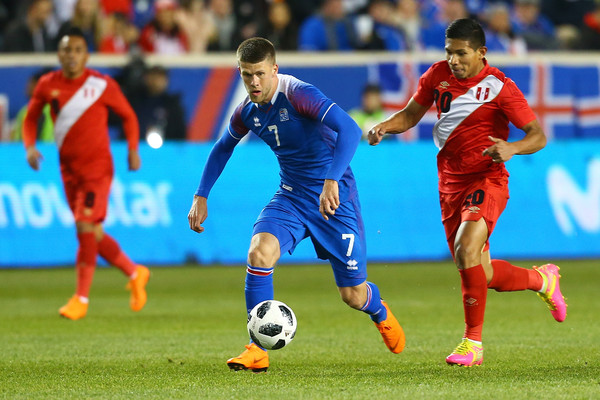 Iceland star Johann Berg Gudmundsson faces a tough race against time to be fit for their match against Nigeria in Volgograd on Friday, Extrasportsnigeria.com reports.

Nigeria’s Super Eagles are looking for their full points while the Icelanders play for full points this time having drawn 1-1 with Argentina in their first match here in Russia.

Gudmundsson was withdrawn 63 minutes into Iceland’s game with Argentina on Saturday and it has now been confirmed that he has suffered a muscle tear.

Gudmundsson became is surely making much of the headlines as he is the first Burnley player to feature in a World Cup since Billy Hamilton did for Northern Ireland in 1982. And he truly helped Iceland to a historic result in what was their first ever World Cup game.

Iceland continue their bid to qualify from Group D when they face a now charged Eagles in Volgograd on Friday and Gudmundsson will be assessed ahead of the game as he looks to win his 69th cap for his country.

Assistant coach Helgi Kolvidsson said, “Johann Berg Gudmundsson has torn a muscle. It remains a question whether he will be fit but we’ll see on match-day.”

Iceland will finish their Group D campaign against Croatia on Tuesday while Nigeria will face their regular World Cup opponents, Argentina. The Eagles will shift base to Volgograd on Thursday for the match they need to win if they desire to remain in Russia after the first round.