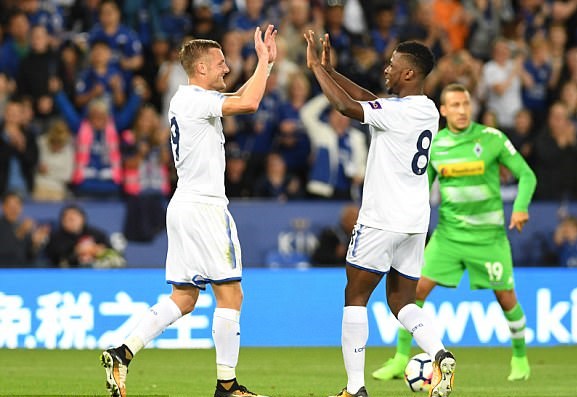 Leicester manager Craig Shakespeare believes Leicester new boy Kelechi Iheanacho can help ease the goal burden on Jamie Vardy. England star Vardy has scored three goals this season – half of the Foxes’ total haul but Shakespeare says all of his players need to chip in but he has high hopes for fit-again £25m signing Iheanacho.
The Nigerian’s 21 goals in 64 appearances for Manchester City persuaded Leicester to shell out such a massive fee for the young gun.
And Shakespeare would love the Nigerian frontman, 20, to form a deadly duo with Vardy, according to a Daily Mail report.
He said, “We will all know about Kelechi in terms of his pace and goalscoring prowess, but also his team play and link-up play is very good as well.
“It would be nice to think we could all do that all share the goals. That is the aim. We’ve had a word about it.
“We all have targets for the defenders as well as the midfielders.
“Kelechi’s record is very good and I am sure when he gets his opportunity the idea is for him to continue in that vein.”
Iheanacho came off the bench to score in Nigeria’s 4-0 drubbing of Cameroon in the 2018 World Cup qualifier played in Uyo.
Leicester are floundering near the bottom but Shakespeare says the table doesn’t tell the true story. They have had a tough start with trips to Arsenal and Manchester United and a home clash with Chelsea.
They face newly-promoted Huddersfield on Saturday with Shakespeare adding, “You always need to be positive, but you can’t get away from the points total and I understand that.
“In terms of who we’ve played, we spoke about it at the start of the season and we knew it’d be tough.
“It’s panned out that way, but we need to turn those performances into results.
“Every game is about the three points and the next big important one is Huddersfield which will be a really tough game, make no mistake.
“Performances in the main have been good but we need to put some points on the board as well.”