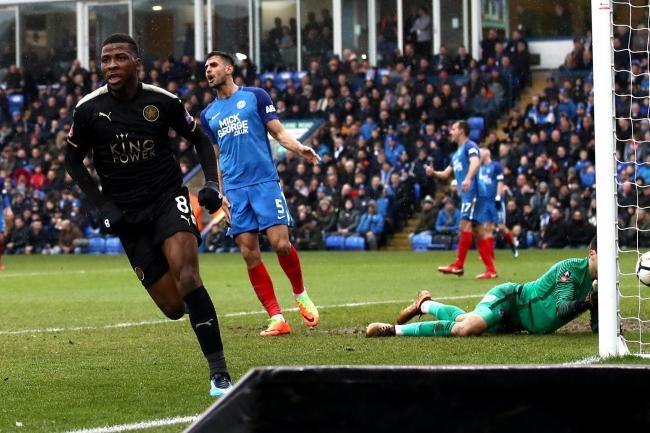 Kelechi Iheanacho is having good time with the FA Cup run as he scored a back-to-back brace in the Emirates FA Cup win on Saturday. Nigeria’s Wilfred Ndidi was also on target at ABAX Stadium on Saturday as Leicester defeated Peterborough 5-1.

Iheanacho is yet to score a league goal since his £25m summer move but has scored nine FA Cup goals in nine ties since January 2016 – more than anyone else.

Fousseni Diabate opened scoring for Leicester on his Foxes debut before Iheanacho scored twice and then Peterborough pull one back. Diabete scored again and substitute Ndidi completed the hits.

Diabate – signed from French side Gazelec Ajaccio – toe-poked in and Iheanacho guided the ball into the corner to put the visitors in control.

Posh improved after the break, pulling one back through Andrew Hughes, but Malian Diabate and substitute Wilfred Ndidi struck late on for the Foxes.

Premier League Leicester had Jamie Vardy and Riyad Mahrez on the bench but did not need to call on either, while Shinji Okazaki was left out of the squad altogether,

A side showing 10 changes proved more than strong enough as the Foxes’ fringe forwards thrived.

Demarai Gray and academy product Harvey Barnes played their part but it was Diabate and Nigerian Iheanacho who did the damage.

Diabate was lively throughout and slotted effortlessly into a fluid front four, while his strike partner now has braces in consecutive FA Cup ties after also scoring twice in Leicester’s replay win over Fleetwood in the third round.