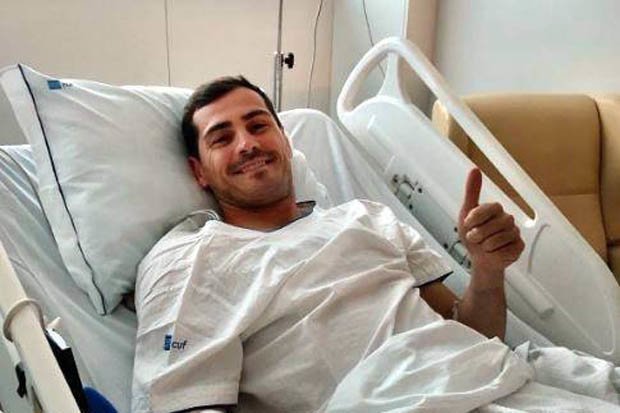 Iker Casillas will not be able to resume his football career following his heart attack, according to a well-known Spanish cardiologist. Daily Mirror’s report gave details of the expert’s view.

The Spanish World Cup winning goalkeeper suffered a myocardial infarction in training with Porto on Wednesday, and was immediately rushed the hospital for surgery.

That surgery was a success, and Casillas shared a picture of himself smiling from his hospital bed on Wednesday evening.

Porto tweeted to inform fans that he was on the mend, writing: “Casillas is now doing well, the cardiac problem has been resolved. Always together. Go Iker.”

Casillas’ agent Carlos Cutropia said that the goalkeeper, 37, had no indication that anything was wrong prior to the incident. He told Spanish radio station COPE : “Iker had an intense training session on Tuesday and another one on Wednesday morning.

“Halfway through Wednesday’s session he felt unwell and his chest, mouth and arms were hurting.

“We’re extremely grateful to Porto’s medical team who got Iker to hospital so quickly.”

And now cardiologist and former Real Madrid basketball player Juan Antonio Corbalan says that while Casillas will make a full recovery, he will no longer be able to play football.

“You cannot play football with a coronary stent, especially a goalkeeper,” he said, via AS.

“Iker will return to living a normal life, but he can no longer be a professional athlete.”