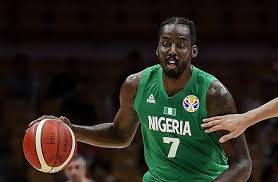 Nigeria basketball star Al-Farouq Aminu has revealed that a pledge made in 2012 helped ignite D’Tigers to their third straight Olympics ticket.

Extrasportsnigeria.com reports that Nigeria on Sunday recorded a decisive 86-73 victory over hosts China, which saw them finish the FIBA Basketball World Cup with a 3-2 record and seal direct entry into the Olympics as the best African team.

Al-Farouq Aminu told FIBA.com: “It was a character builder for our team (beating China and picking a ticket).

“We didn’t accomplish everything we wanted to in China but we set a new goal to make the Olympics and we did so.

“I remember when I joined the team in 2012 we said we did not want to miss an Olympics. It’s a beautiful feeling (to qualify). It’s amazing.”

China also essentially needed victory to secure an Olympics spot. Every time they were challenged, Nigeria calmly silenced the crowd with clutch buckets led by young star Josh Okogie (16 points) who boldly attacked the rim in the fourth.

Aminu said he was excited about the state of Nigeria’s team. “We know we have a good team and we are starting to put the pieces together,” he said. “Guys have started wanting to play with the national team.

“When I first played for the team, it was kind of taboo for guys to join the team and now I’m seeing guys like Josh (Okogie)…I’m so happy and proud for him.

“I see the future is bright with him and the guys we got. I’m excited with what we can accomplish.”

“We feel right now is the golden age for Nigerian basketball and we have a lot of exciting up and coming players,” he said.

“We just want to keep on building and have a good showing in Japan. It feels really good knowing that we are going back to the Olympics.”

Nigeria coach Alexander Nwora praised his team’s determination and was confident they could make some noise in Tokyo.

“We have a lot of talent but we showed resiliency,” he said. “We weren’t going to settle with leaving China with a loss.

“We’re going to make the necessary preparations now so that we can be very, very good at the Olympics.”