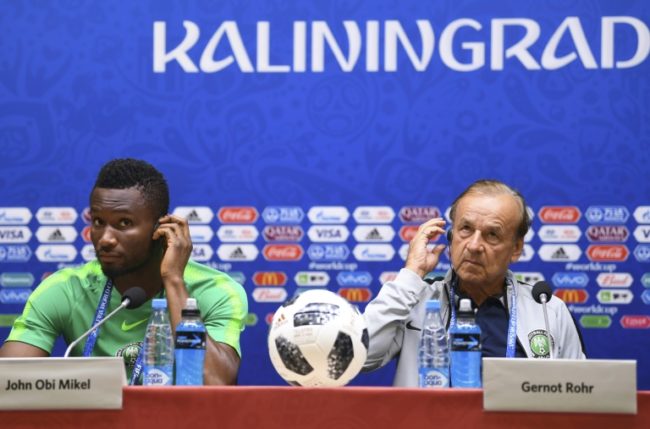 Nigeria coach Gernot Rohr rues the injuries and suspension that has robbed him of four of his regulars for Saturday’s crucial 2019 AFCON qualifier against the Bafana Bafana of South Africa, but is comforted that the situation has presented opportunities for some other performers to step onto the runway.

First choice goalkeeper Francis Uzoho, wing back Abdullahi Shehu and forward Odion Ighalo – top goalscorer in the 2019 AFCON qualifying race with six goals – are not in South Africa as a result of injury, while midfielder Wilfred Ndidi is suspended after cards against Seychelles and Libya.

“Yes, we have a number of injuries and one suspension. But we cannot continue to talk about that. We must look at the personnel with us now and see the situation as opportunity for them to step up and prove what they can do.

“I am happy we have a young team determined to achieve. Everyone here is good enough to represent Nigeria and they will go in there and do the job.”

Nigeria’s 23-man squad for this game includes former U17 World Cup winners Kelechi Iheanacho, Isaac Success, Victor Osimhen and Samuel Chukwueze – who, amongst them, must step up for the main striker’s mantle in the forced absence of Ighalo.

There are also France-based Samuel Kalu (good outings away to Seychelles and at home to Libya) and Henry Onyekuru who plays in Turkey, not to mention Musa, Nigeria’s highest goalscorer ever at the FIFA World Cup.

While Rohr has to deal with the absence of four regulars, Bafana Bafana Coach Stuart Baxter is not better off, as Dean Furman, Bongani Zungu, Keegan Dolly, Sibusiso Vilakazi, Bradlet Grobler and Kamohelo Mokotjo are not available.

While Percy Tau and Thulani Serero are real threats, Tokelo Rantie – who scored three of South Africa’s last five goals against Nigeria – is out of the picture having been sacked in Turkey and presently nursing a new career as a farmer.