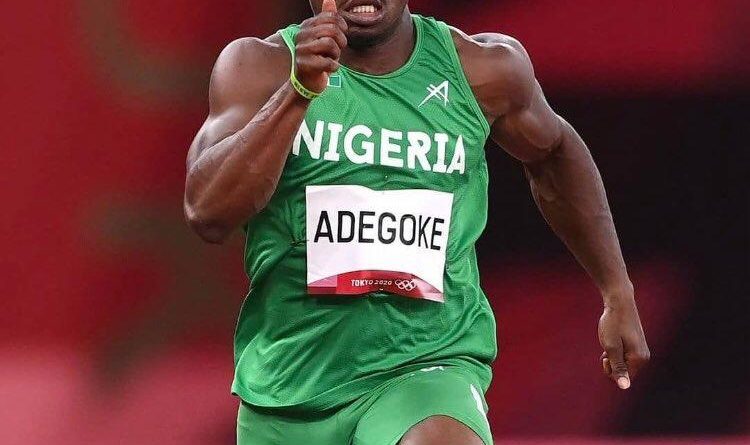 Enoch Adegoke’s bid to become the first Nigerian, man or woman to mount the podium for a blue ribband event medal at the Olympics was thwarted about 40 metres into the race at the Olympic Stadium in Tokyo, Japan Sunday evening.

The 21 year old had made history earlier on the night when he became only the third Nigerian man to qualify for the 100m final after the iconic duo of Davidson Ezinwa and Olapade Adeniken.

He also became the first Nigerian 100m finalist since Ezinwa placed seventh at the Atlanta 1996 Olympics.

The reigning Nigeria 100m king set a new 9.98 seconds personal best in his first round heat to raise expectations of a possible historic medal but in the final, a possible harmstring injury ensured he pulled up soon after the 40 metres mark and after overtaking Canada’s Andre De Grasse on his outside lane.

De Grasse would later finish third fuelling beliefs that Adegoke could have raced to the podium and history books.

Adegoke’s fairytale story which ended as an Olympic 100m finalist began in January when he scorched to a 10.16 seconds world lead at the Athletics Federation of Nigeria, AFN, All Comers meet in Akure, South West Nigeria.

Two months later, he ran 10.16 seconds again at the MOC Grand Prix at the sports ground of Yaba College of Technology in Yaba, Lagos.

This was after a +2.7mps tail wind rendered as invalid the 10.05 seconds he ran in his semi-final heat at meeting.

Adegoke did not only prove his early in the season 10.16 seconds return in Akure was not by happenstance, he also established himself as the athlete to beat in the Nigerian athletics circuit.

But when he failed to at least race inside 10.20 at the 20th National Sports festival in Benin City in April, doubters began to wonder if he could achieve the 10.05 seconds Tokyo 2020 Olympics qual;ification standard.

Adegoke proved his doubters wrong two months later and at the biggest athletics stage in Nigeria, the national championships which was used as trials for the Tokyo 2020 Olympics.

He blitzed to a new 10.06 seconds personal best in his semifinal heat at the competition. The clock first read 10.05 seconds and got the whole stadium into a frenzy.

The euphoria and excitement were replaced by disappointment after the time computer print out of the result revealed he was just a hundredth of a second outside the qualification standard.

Undaunted and with the pressure a blue ribband event naturally generates, Adegoke overcame all odds as he ran past the 10.05 seconds qualification standard, stopping the clock at 10.00 seconds.

It was the fastest time ever achieved by a home-based athlete. The time catapulted him to joint 11th with Chidi Imoh in the Nigerian all-time list.

At the Olympics, Adegoke proved his incredible performances in Nigeria did not happen by accident as he chose the biggest sporting stage in the world to announce his arrival into the club of sub-10 seconds 100m runners in Nigeria.

His 9.98 seconds performance in his first round 100m heat in Tokyo made him the 11th man to break 10 seconds in the event in Nigeria and the 25th in Africa.