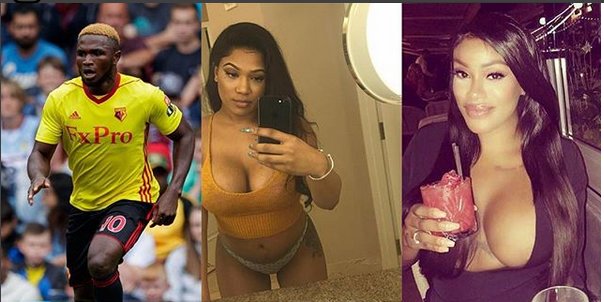 A PREMIER League ace, Isaac Success, paid four hookers £2,000 for a hotel romp – but failed to score with any of them after drinking two bottles of Baileys, according to The Sun report. The Nigerian, 21, who stars for Watford was arrested after angrily demanding his money back.

Escort Alexis Domerge said the Watford star boasted of his prowess in the bedroom after paying the women £2,000 for a hotel romp.

But the striker, who has found the net only once in 19 Watford appearances, drank two bottle of Baileys – and then repeatedly failed to score with the hookers. When the women decided to blow the whistle on Success’s lacklustre performance after 90 minutes, he angrily demanded his money back.

He was said to have been arrested in the hotel lobby after cops were called.

Alexis, 24, said, “He accused us of ripping him off and asked for his money to be returned.

“It was terrifying. He had paid four of us £500 each to party with him and we all got naked as soon as the money came through on our phone bank accounts.

“He was drinking Baileys straight from the bottle. He must have chugged at least two. I pulled off his shorts and got down to it with three other girls doing everything you could imagine.

“But he was getting frustrated. What do you expect if you drink two bottles of Baileys liqueur straight from the bottle?”

Fellow escort Michaela Carter, 30, said, “He had a nice body and all four of us massaged him for a full hour and a half – as long as a football match.

“He had been boasting to us all night about how much he earned and how much fun we were going to have. But it’s fair to say that Mr Success did not live up to his name during our night together.

“He seemed really keen on Baileys – swigging the stuff out of the bottle. It made me cringe because it’s so sickly sweet.

“He seemed a bit shy and awkward, probably because he’s only 21. After a bit of chat Alexis took charge and said it was time to get down to business.

“She laughed and told him, ‘We want your money before the honey’.

“So he transferred £2,000 straight to one of the girls which was divided between the four of us. The partying started as soon as the money came into our accounts and we all stripped off. All five of us were squirming around on the bed but after a while we realised the Baileys had taken its toll.

“Eventually, I told him I couldn’t stay any longer and we couldn’t give him extra time. That’s when things started to get nasty.

“There was a lot of screaming which must have woken the entire hotel. At that point the police were called. We were all making a terrible racket.

“I ended up with a slight cut on my face and a bruise on my arm during the chaos.

“I don’t know how it happened. During the row I also stumbled backwards and broke the heels of my £600 Louboutin shoes. It meant I was already £100 down.”

Nigerian international Success, who earns £30,000 a week, booked the four girls after spending the night at a lap-dancing club in London’s West End.

In the early hours they were texted the details of the luxury Sopwell House hotel, Herts, where Success had hired a first-floor suite.

Michaela said, “We met him and a couple of his mates in reception but they left, leaving just Isaac and the four of us.

“We went up to his room. It was a nice room and I could tell he had lots of money because there were designer clothes in there and Christian Louboutin trainers which can cost £800 a pair.

“He offered us drinks then started boasting about how rich he was.

Alexis, from Brooklyn, New York, said, “I was actually quite turned on by his body. He’s beautifully toned.

“Eventually, Michaela and one of the other girls broke it to him that they couldn’t stay any longer.

“But he then accused us of ripping him off and demanded his money back.

“Several police cars arrived really quickly and about five officers came in and cuffed his hands behind his back and took him outside.

“Success admitted that he had paid us for sex. But he also claimed we’d cheated him out of the cash, without mentioning the reason why he didn’t have sex. All this commotion was more than the hotel management could take and they ordered us out of the hotel — including him. It’s a really nice place and I guess this isn’t the sort of behaviour they tolerate.”

The hookers said Success later called his bank and had the payments to them stopped.

Alexis said, “We couldn’t believe it when he accused us of cheating him and got the bank to get him his money back.

“We made a deal and it wasn’t our fault he didn’t have a good time. His behaviour was off the scale.”

Success signed for Watford from Spanish side Granada for £12.5million last July — then a record fee for the Hertfordshire club. He has struggled to make the starting line-up since.

He sat out Watford’s 2-0 away win at Southampton on September 9 but went out on the town in London the following day before hooking up with the girls. Isaac was not part of the Super Eagles success story on Saturday as they defeated Zambia 1-0 to secure a 2018 World Cup ticket.

Alexis and Michaela and another 34-year-old escort were recruited by a fourth hooker, a friend of Success’s.

A Hertfordshire Police spokesman said, “Police are investigating an allegation of assault reported to have occurred at 6.30am at Sopwell House in St Albans on Monday September 11.

A representative for the player said: “We strongly refute all allegations against Isaac and will vigorously fight to clear his name.”