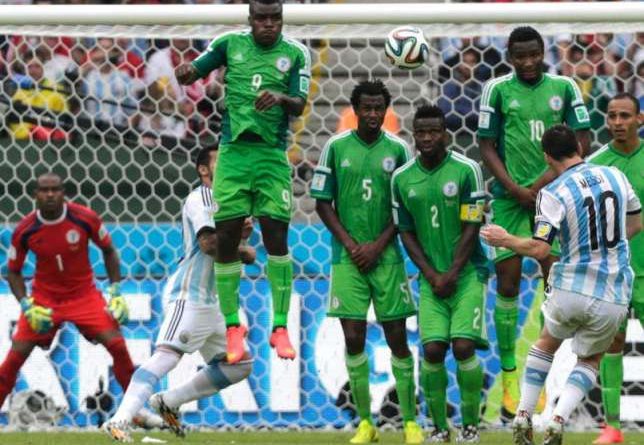 Argentinean football chiefs held a meeting with the Russian ambassador over safety fears sparked by a sick image ISIS mock up of Lionel Messi crying blood.

According a Daily Mirror report, the chilling poster is the latest threat to next year’s World Cup in Russia as part of a campaign of terror by ISIS fanatics. The threat also comes just as the Super Eagles of Nigeria prepare to face the South Americans in Russia next in both countries build up to the World Cup.

In response to the threat, President of the Argentine FA Claudio Tapia met Ambassador Victor Koronelli in Buenos Aires to discuss safety arrangements for the tournament.

Although Tapia did not disclose what was said in the meeting, he is worried about any potential threat to the team and their star player Messi.

Nigerian officials are yet to make any comment on the issue but no direct reference was made by the terror group to the match in November. Nigeria and two-time world champions Argentina will square up in a an international friendly in the Russian city of Krasnodar on Tuesday, 14th November. The venue is the Krasnodar Arena Stadium, Extrasportsnigeria.com reports.

The image – released by known Islamic State mouthpiece Wafa Media Foundation – is the latest propaganda piece designed to spread fear through fans hoping to visit the festival of football.

Coupled with the startling words ‘Just Terrorism’ and the tagline ‘You are fighting a state that does not have failure in it’s dictionary’ it shows the Barcelona legend wearing a prison suit, with his name printed on his chest.

The Arabic text mirrors what is said in English for maximum affect.

And this is not the only image released in a shocking campaign by the ISIS-affiliated group, who aim their output at Westerners.

Another image posted last week shows the World Cup symbol next to a masked man holding a sub machine with the text ‘Wait for Us’.

They have swamped social media with an image of the rifle-carrying Jihadi and a bomb bearing the regime’s infamous black flag.

It stands in front of Volgograd Arena in Southern Russia football stadium.

It appears to show a Russian jihadist, with many active in large swathes of Chechnya.

An official symbol of the finals is also included in the alarming promise to bring mayhem to the tournament.