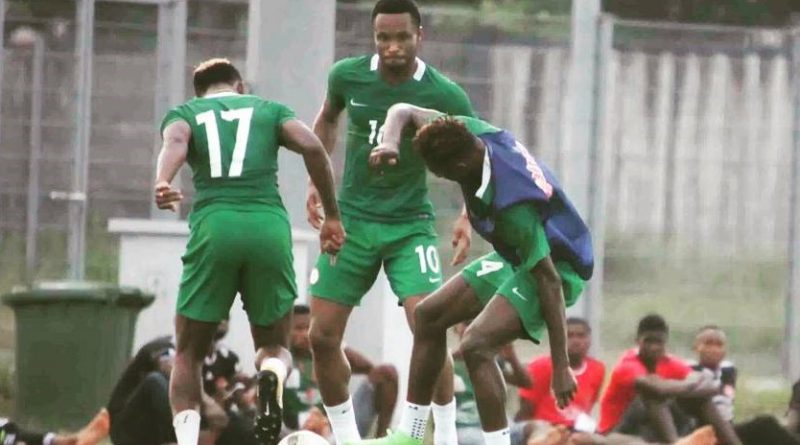 Pius Pius
Victor Moses, Leon Balogun, Moses Simon, Anthony Nwakaeme, John Ogu, Uche Agbo and Aaron Samuel all landed in Uyo on Tuesday ahead of Nigeria’s World Cup qualifying game against Cameroon on Friday, Extrasportsnigeria.com reports. The arrival of Moses and other means all the invited have settled into Uyo for the match. Only Anorthosis defender Abdullahi Shehu, who was in action for his Cypriot club on Sunday night, did not show up as of the time this report.
And even as the Nigerians await the Indomitable Lions, Eagles were handed a boost as Chippa United goalkeeper Daniel Akpeyi took part in the first training session on Tuesday evening. Before he trained there had been fears that Akpeyi won’t be available for selection after picking up a training ground injury in South Africa just before his trip to Nigeria. Dele Alampasu looked set to take charge it appears the decision for who will man the post on Friday has to wait.
Ikechukwu Ezenwa and the top goalkeepers were drilled by the goalkeeper coach Enrico Pionetti.
The 24 players started the workout held at Godswill Akpabio International Stadium with a jogging session, before the goalkeepers were separated to participate in ball handling drills.
Eagles pre-match press parley will hold at the Le Meridien, Uyo on Wednesday from 11.15am. Tuesday training session was open to the public by the Nigeria Football Federation officials have announced that Wednesday and Thursday sessions would be closed.