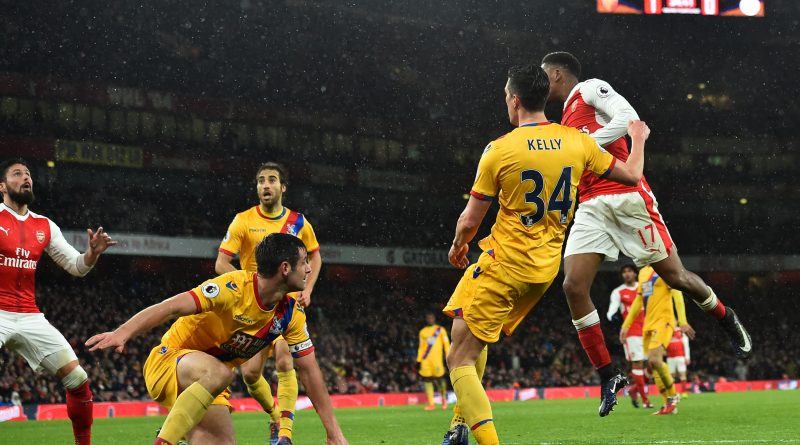 But before that goal Olivier Giroud had scored a stupendous “scorpion kick” volley as Arsenal climbed to third place in the Premier League table with a 2-0 New Year’s Day victory over Crystal Palace.

Giroud netted with a breathtaking improvised strike reminiscent of Henrikh Mkhitaryan’s recent goal for Manchester United and Alex Iwobi was also on target at the Emirates Stadium.

A bashful Giroud told the BBC: “It is not difficult to say it is the best one. I was a bit lucky, but it was the only thing I could do. The ball was behind me and I tried to hit it with a backheel.”

Victory left Arsenal nine points below leaders Chelsea and they were joined in the top four by Tottenham Hotspur, who replaced Manchester City in the Champions League places after winning 4-1 at Watford.

Arsenal, who were without the ill Mesut Ozil, finish the weekend three points below second-place Liverpool, with north London rivals Spurs a point back, above City on goal difference.

Armenian midfielder Mkhitaryan advanced a strong claim to the Goal of the Season award in United’s 3-1 win over Sunderland on Boxing Day, only for Giroud to better his strike just six days later.

The France striker squandered a golden early chance when he miscued from Nacho Monreal’s volleyed cross, but he atoned in memorable fashion in the 17th minute.

He was involved twice in a sweeping move that began when Lucas Perez slid in to cut out a square pass from Palace’s ex-Arsenal midfielder Mathieu Flamini.

Hector Bellerin played the ball forward to Giroud and his clever backheel found Granit Xhaka, who helped the ball on to Iwobi, who slipped it to Alexis Sanchez on the left.

Sanchez’s cross was behind Giroud, but he adjusted brilliantly to hook the ball forward with his left heel, propelling it over Wayne Hennessey, off the bar and into the net.

“I have been spoilt over the years with all the great strikers – (Dennis) Bergkamp, (Thierry) Henry,” he said.

“You remember them because they are linked with special goals. This will be the Giroud goal forever.”

After Iwobi’s goal Palace rallied, Petr Cech saving from Yohan Cabaye and Andros Townsend, but new manager Sam Allardyce would not be spared from a defeat that kept his side one place above the bottom three.

Tottenham beat Watford in their second successive 4-1 win, having prevailed by the same scoreline at Southampton in mid-week, to rack up a fourth consecutive league victory. It was a game that Nigeria’s Odion Ighalo started.

His clever pass freed Kane to beat Heurelho Gomes at his near post in the 27th minute and six minutes later the former Burnley player’s cross was volleyed home by Kane at the back post.

Dele Alli had earlier hit the bar and he got on the score-sheet either side of half-time.

Alli pounced on Younes Kaboul’s mishit clearance to roll a shot into the bottom-right corner and then, after the change of ends, slipped the ball past Gomes from Kane’s right-wing cross.

Kaboul reduced the arrears in stoppage time, forcing the ball over the line from a free-kick, but the hosts did not celebrate.

“The first half was one of the best we’ve played this season. I’m very happy because it was a difficult game and the team responded.

“We know that Chelsea’s performance is very high. They are a very good team with high confidence, but we will try to challenge them to take the three points.