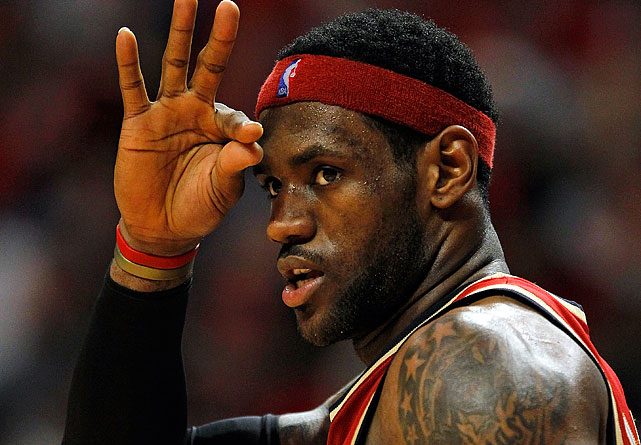 Cleveland superstar LeBron James became the first player to score 20,000 points in a Cavaliers jersey on Sunday, pouring in 25 in the NBA champions’ 107-91 victory over the Oklahoma City Thunder, AFP reports.

James added 14 rebounds and eight assists as the Cavs withstood Russell Westbrook’s 24th triple-double of the season — and his first against Cleveland.

But he struggled much of the day connecting on just seven of 26 from the field and coughing up four turnovers in the face of strong defending by Cleveland’s Iman Shumpert.

Cleveland led by as many as 19 in the third quarter, but the Thunder pulled within 82-75 on a three-pointer from Cameron Payne while Westbrook rested during the fourth quarter.

After Westbrook re-entered, the Thunder went scoreless on their next six possessions.

Irving scored 29 points with 10 assists as the Cavs shook off the early departure of Kevin Love. Love had played less than two minutes in the second quarter when he left with back spasms.

“It’s nothing to play with,” James said of Love’s back issues. James has battled back trouble of his own and knows how debilitating it can be.

“It’s a terrible feeling when your back is hurt. It just limits you more than anything,” he said. “I know it’s very frustrating for him because he puts in a lot of work. He’s in the weight room all the time and he’s doing his thing to keep his body in shape, then this is happening to him so it’s very frustrating. Hopefully things get better for him soon.”

James, who is eighth on the NBA’s all-time scoring list with 27,938 career points, has nearly twice as many points as anyone else in a Cleveland uniform. Zydrunas Ilgauskas is second on the team’s scoring list with 10,616 points.

“I’m blessed I’ve played with some great teammates in this uniform the last three years and obviously my first seven in the league,” James said.

“Those guys set screens for me, they rebound the ball, kick it to me, they work their tails off for me to be able to put up 20,000 as a Cav.”