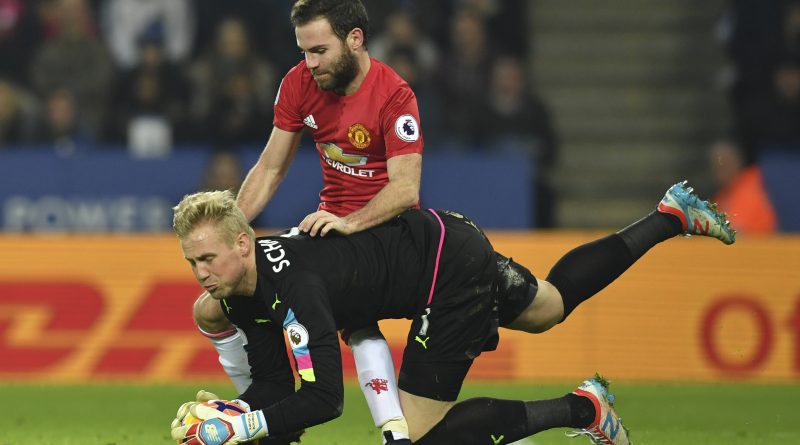 Gabriel Jesus and Henrikh Mkhitaryan stole the headlines as Manchester City and Manchester United made up important ground in the race for Champions League qualification with wins on Sunday.

Jesus, 19, marked his full home debut for City by scoring twice, including a 92nd-minute winner, to give Pep Guardiola’s side a 2-1 win over Swansea City that lifted them up to third, AFP reports.

Mkhitaryan scored one goal and made another in a 3-0 victory at relegation-threatened champions Leicester City that took United to within two points of the top four.

“It was really important for us. We lost two points in the last match at home and had three consecutive draws, so we needed the points,” said United manager Jose Mourinho.

“I am happy. We don’t have a league defeat since October and if we could transform the unlucky draws to victories, we would be in an amazing position.”

Mourinho’s side remain sixth, a position they have occupied since November, but Arsenal, beaten 3-1 by leaders Chelsea on Saturday, and Liverpool, stunned 2-0 by Hull City, are now within reach.

United are a point behind Liverpool, two points below fourth-place Arsenal and four points off City, who trail second-place Tottenham Hotspur by one point and Chelsea by 10.

After three successive league draws, Mourinho changed tack for the trip to the King Power Stadium, bringing in Juan Mata for Michael Carrick and ditching his usual 4-1-4-1 system for a 4-4-2.

But United, who were missing Wayne Rooney through illness, looked off their game until a first-half switch to a 4-2-3-1 formation.

The move brought Mkhitaryan into the number 10 role and he put United ahead in the 42nd minute, beating Robert Huth to Chris Smalling’s header on halfway and sprinting clear to score.

Less than 90 seconds later it was 2-0 as Zlatan Ibrahimovic expertly steered Antonio Valencia’s cross past Kasper Schmeichel for his 20th goal of the season.

Mkhitaryan turned creator as United put the game to bed five minutes into the second half, facilitating a one-two with Mata that freed the Spaniard to beat Schmeichel at his near post.

It was Leicester’s 13th defeat of the campaign and kept Claudio Ranieri’s men a slender point above the relegation zone.

“It is important now to get the confidence,” Ranieri said.

“Last season everything was right and the players got confidence. Now they are anxious.”

“It is time for every single one of us, from the top to the bottom of this club, to stand up and be counted,” he told Sky Sports. “If we don’t we’ll get relegated.”

Jesus needed just 11 minutes to crown his first home start for Manchester City with a goal as he put Guardiola’s men in front against Paul Clement’s improving Swansea.

City completely dominated the first half, but took their foot off the pedal after the break and were punished when Gylfi Sigurdsson swept in a low, left-foot equaliser in the 81st minute.

But Jesus had the final say, tucking the ball into the net at the second attempt after his header from Silva’s right-wing cross had been parried by Fabianski.

“He has arrived really, really, well. We are happy to have him.

Swansea remain a point above the relegation zone, below Leicester and Middlesbrough on goal difference, and Clement felt his side had been unfortunate not to come away with a point.

“We deserved more,” he said. “If we can build on that we will have some more wins not far away