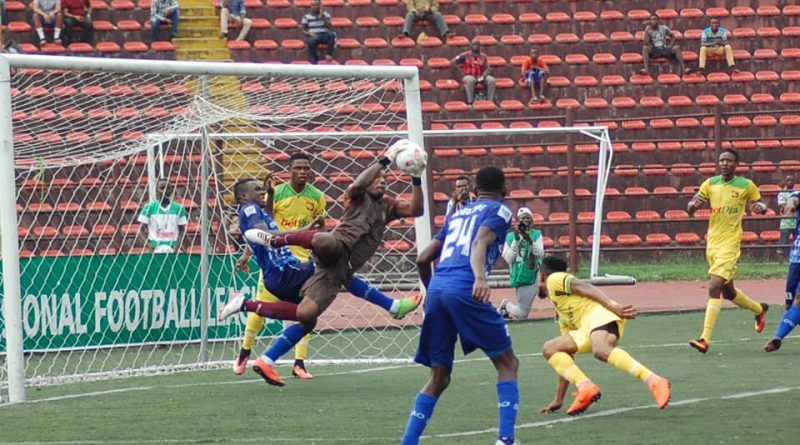 Dramatic events unfolded on Wednesday at the Yakubu Gown Stadium in Port Harcourt as Rivers United recorded a victory of epic and dramatic proportions against Remo Stars to move top of Group A of this season’s Nigeria Professional Football League (NPFL).

Wasiu Jimoh was the hero of the 10-man Rivers team as he prodded home from close range, at the death, when the visitors, full of fight and doggedness, thought they had done enough to earn a share of the spoils.

Kennedy Boboye, head coach of Remo Stars, looked to the heavens, for a few seconds, as though seeking answers to the dramatic events that unfolded on the pitch while the United players mobbed Jimoh, as they celebrated.

The Rivers United manager, Stanley Eguma made three changes to the side that beat MFM 1-0 on Sunday with Gbadebo Samson, Kehinde Adedipe and Ugochukwu Leonard coming in for Emotan Cletus, Temple Emekayi and Obomate Frederick who was bereaved following the death of his Father on Tuesday.

Jimoh quickly got into the swing of things as he got on the end of a sweeping move by the hosts only to see his goal bound shot on seven minutes deflected away for a corner.

It was a wonderfully open first half that was sometimes marred by profligacy.

One of such moments arrived on the quarter hour when Jimoh stormed down the byline to deliver an inch perfect cross which Ugochukwu Leonard somehow failed to reach when the faintest of touches at the opportune moment would have seen United open the scoring.

With the time allocated for stoppages running out, many of the home fans started leaving the Stadium in disappointment but Jimoh stopped them in their tracks with a moment for ever to be etched in the history of the football club.

“The only thing that was going through my mind (just before I scored) was that I was going to score,” an elated Jimoh told Rivers United official website, www.riversunitedfc.com.ng after the dramatic contest.

“I also told myself that if I didn’t score, then we would score. Towards the end of the game, we were pushing hard.

“We played like a team that wanted to score so before the end of the game, I had the self-belief that a goal was going to come.”

Wednesday’s win was enough to take United to the top of Group A of the NPFL with eight points from four matches.