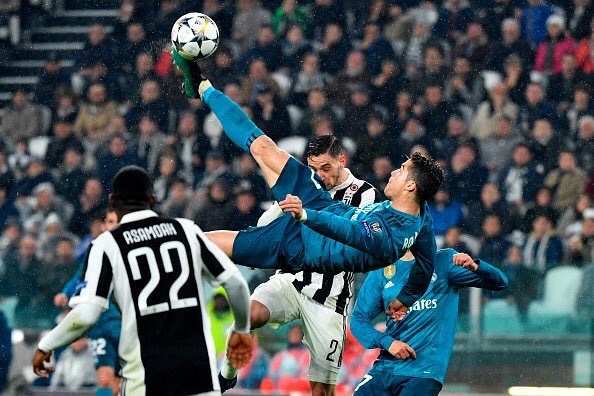 Even by his own standards, this was obscene from Cristiano Ronaldo. He left the entire world amazed and transfixed.

The great Portuguese stunned the Juventus Stadium into silence on Tuesday night as he scored an overhead kick of wonderful power, grace and daring.

The Real Madrid man had already opened the scoring after three minutes with a neat finish, but the experienced Italian side rallied well to have the better of the first half, according to The Telegraph.

After 64 minutes, however, Ronaldo produced one of the most delightful goals this competition has seen.

A mix-up between Giorgio Chiellini and Gianluigi Buffon saw Ronaldo pounce on the ball. He slipped it to Lucas Vazquez, who struck a crisp drive. A fine save from Buffon looked to have restored order, but the ball dropped handily for Dani Carvajal on the right. He crossed the ball, high, and Ronaldo leaped like an immaculately coiffured salmon to bicycle-kick the ball into the corner.

It was a perfect blend of beauty and timing. The mighty Buffon was powerless. And there was no way back for a gutted Juventus.

Shortly after that, Paulo Dybala was sent off for a second yellow card, his first half booking for diving compounded by a kung-fu kick to the chest of Carvajal.

Relentless Madrid sought the third, and it eventually came when Ronaldo stabbed through a pass for Marcelo to clip over the keeper.

Ronaldo’s manager, who himself had his moments with the football, summed up the feelings of everyone watching.

The return leg will surely be a formality and the only real question seems to be whether Ronaldo can add to his streak of having scored in his last ten Champions League matches.

Zizou said, “We did some fantastic things out there this evening. That is what Cristiano can do, that is why he stands out from the others, we are so happy to have him in our team.”