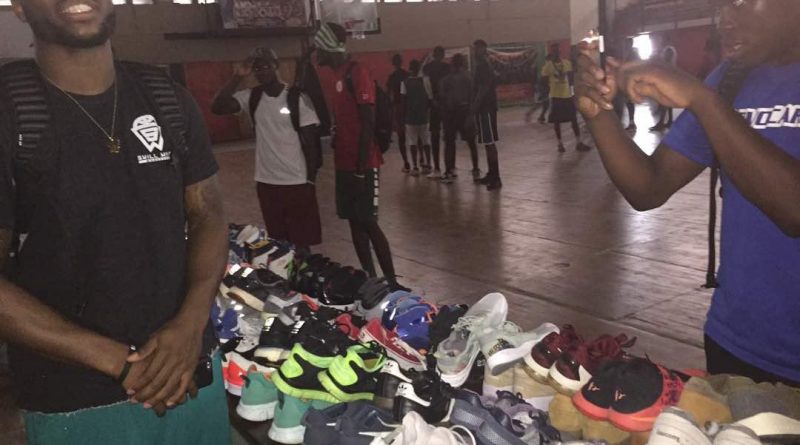 A lot of the young basketballers filled up the Sports Hall of the national Stadium, Lagos. Even before the lights came on Wednesday and with minimal publicity, the young Nigerians knew something good was about to happen and conversed in groups with a lot of expectations. They were all there for the opportunity to grab free pairs of canvass shoes being made available by the Kelechi Anuna Foundation.

“People find different ways of giving back to the society; it’s something we always have to do as we move up. This is my own way of contributing to the career development of these young players,” Kelechi told Extrasportsnigeria.com at the stadium.

“I believe I can help them through this drive. Some of my colleagues run camps but I want to start this way because I can that many of them don’t really have shoes to train with especially in an environment like this.”

On the day all the 21 ladies that showed up got shoes because there was more than enough for them. For the boys it was not exactly free of charge. You had to beat your opponent to the shoes. The boys eliminated themselves via one-on-one games until the crowd reduced to a manageable level.

And it was such a delight for those that got one especially for the fact that many of them had never been able to put on brand new pairs of shoes. They had always counted on those handed down from those with bigger opportunities.

It was the second year for the Shoe Drive for the foundation. The first was held in 2017 by Kelechi who starred for the Nigerian national side, D’Tigers as they finished as runners-up at AfroBasket finals in Tunisia last year.

“The next step will be to add a basketball camp to this even as we do the shoes drive. I am thankful to my partners and I hope that we could get more shoes and equipment to give out as the programme expands,” the player said.