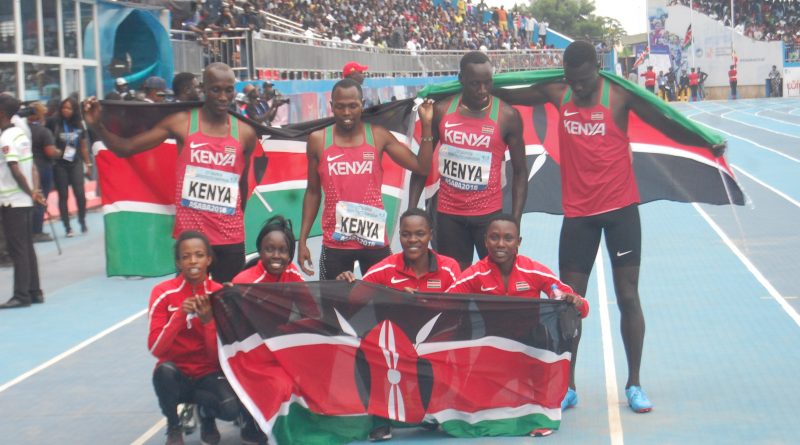 Team Kenya finished as champions of CAA Asaba 2018 with the East Africans finishing so strongly on the final day. They garnered a total of 11 gold six silver and two bronze medals, reports Extrasportsnigeria.com.

South Africa who led for most of the five-day event settled for second place with nine gold, 13 silver and eight bronze medals.

Team Nigeria ended their campaign also on a good note on the final day of the 21st Senior Athletics Championships winning three gold medals at the Stephen Keshi Stadium in Asaba, Delta State to finish third. Morocco and Ethiopia complete the list of the top five teams.

The last set of gold medals for Nigeria came in the Triple Jump Event, 400m Women’s Hurdles Event and the 4x400m Women’s Relay event. Though Nigeria won a silver medal in the 200m event and two more bronze medals in the javelin men and 4x400m men’s event it was not enough to give Nigeria a better finish in the biennial athletics championships as the hosts finished third overall on the medals table same way it was at the last edition in Durban 2016.

For the first time in the history of the African championships, athletes from Nigeria and other African countries did not just go home with their medals, but with monetary reward.

The Local Organizing Committee on Sunday revealed prize money for athletes who won medals in Asaba.

Speaking in Asaba, LOC Chairman Solomon Ogba announced that athletes who won gold medal would get a cash prize of $3000 each; silver medallists $2000, while bronze medallists went home with $1000.

Over 120 medals were won at this 2018 edition. The next edition of the championship will be taking place in Algeria.