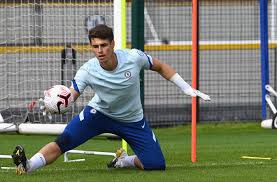 KEPA Arrizabalaga has done a shock U-turn and wants to fight for his Chelsea future.

He became the world’s most expensive keeper when the Blues paid £71.6million to get the Spanish stopper from Athletic Bilbao in 2018.

But only four weeks ago, Kepa, 25, was axed for the FA Cup final and a Champions League clash at Bayern Munich to leave him fearing he would never play for Chelsea again.

It was the climax to the most troublesome period of his career while he struggled to convince manager Frank Lampard to show faith in him.

But TheSun.co.uk reports that Kepa has repaired relations with the chief and is impressed by the club’s defensive strengthening recently.

Chelsea have splashed more than £136m in the last few weeks, bringing in, among others, left-back Ben Chilwell and centre-half Thiago Silva.

Kepa is now convinced his best option is to stay put rather than seek a move from Stamford Bridge.

He still has four years left on a £150,000-a-week contract and Chelsea would want to recoup at least £50m of their transfer fee back. This has put off clubs offering him a way out.

Kepa played 45 minutes of Saturday’s 1-1 friendly draw at Brighton but that is hardly a sign his place is secure, The Sun report added.

Chelsea have been linked with a string of keepers with the latest being Rennes’ Edouard Mendy in an £18m deal.

Nick Pope, Dean Henderson and Atletico Madrid’s Jan Oblak are others to have triggered interest.