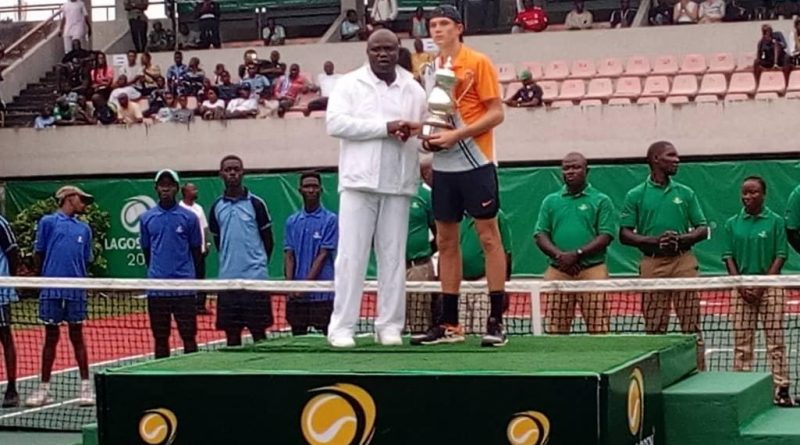 The 16-year-old Brit had a slow start and was puzzled by the incisive finishing of Jomby, who was on a 9-0 win-loss record at the Nigerian Commercial Capital city going into the match. And it looked like the game would go with the form book as the Frenchman took the first set with a comfortable 6-1 win.

However, Draper, who won his first ITF Futures title in Nottingham last month – a feat that earned him a spot in the Top 1,000 of the men’s world rankings making him the only 16-year-old to be ranked in the in three digits of world tennis ranking – failed to lie low and instead held his nerves by minimizing his unforced errors to take control of the second set which he won 6-3.

The final set as expected was tough and it was going with serves until the fourth game when the left-handed double-hand backhand Brit broke which proved decisive in the keenly-contested game.

Jomby, now tired, and gasping for breath almost mounted a comeback going on an advantage on Draper’s serve but it was not to be as the former Wimbledon Open boy’s singles finalist drove a forehand at 40-30 to Jomby’s backhand with the Frenchman motionless.

Draper is the son of the former Lawn Tennis Association chief executive Roger Draper, and is regarded by the British press as the next star of British tennis and the championship point was applauded by a cheering crowd which included Govenor Akinwunmi Ambode, who had an exhibition match just before the men’s singles final.

In the women’s singles final, Indian it was a case of another prime seed bowing before an inferiorly-rated opponent as Swiss Corrin Perin lost to 6-1, 7-6 to Indian Yadlapalli Pranjala Yaldapalli who had a memorable two weeks in Lagos.

Corrin was also beaten by the same opponent in the first leg of the $100, 000 prize money tournament a week earlier and she commended her conqueror stating it has been a tough fortnight for all the participants.

Zimbabwean siblings Benjamin and Coutney Lock clinched the men’s double crown while the women’s doubles title was won by Julia Terziyska of Bulgaria and Rosalie van der Hoek of the Netherlands.

The tennis siblings Benjamin and Courtney Lock captured their sixth team title after beating France’s Tom Jomby and Alexis Klegou from Benin in the final of the $25,000 Lagos Tennis Open in the Nigeria also on Saturday.

Competing in their fourth final as a team this season after winning three successive three successive ITF Futures doubles titles on home soil in June, the Lock brothers recovered from a slow start to win 3-6, 6-4, (10-7).

The players’ father Martin, who is also a former local tennis star and now president of Tennis Zimbabwe expressed his delight for his sons’ achievements in an interview with NewZimbabwe.com.

“I’m really proud of them for making the country proud. This is their fourth title of the season together and this is the biggest they have won so far as a team since it was a $25,000 event compared to the $ 15000 events they have previously won,” he said.