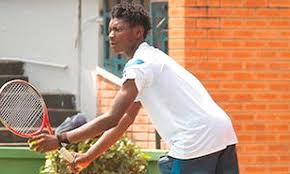 Nigeria’s poor run at the 2018 Lagos Open Tennis Championship continued on Monday with almost all the country’s players in action failed to make it through to the second round in the Men’s Singles, Extrasportsnigeria.com reports.

It all started with Sylvester Emmanuel’s 6-1, 6-4 loss to Indian seventh seed, Niki Poonacha.

The Spain-based Rainoil-sponsored player was Nigeria’s brightest prospect at the $100,000 prize-money event and having fallen to a crushing defeat in the first week, there were hopes that he will bounce back and salvage the nation’s pride but it wasn’t to be as his Asian opponent displayed great tennis skills all through the encounter to seal a rather comfortable win.

Nigeria Tennis Federation number one ranked player Joseph Imeh also crashed following a 6-4, 6-0 to Skander Mansouri of Tunisia. Like Sylvester, Imeh had a forgetful first week bowing out in the first round and was eyeing a better performance but his North African opponent proved too much for him to handle.

It was also a bad day on the court for Emmanuel Idoko and Paul Emmanuel as they were beaten 7-5, 6-2 and 6-4, 6-4 by Lucas Renard of Sweden and Mukhtar Andu of Great Britain respectively.

The Women’s Singles also commenced with Nigeria’s Oyinlomo Quadre failing to get past the first round following a 6-0, 6-3 loss to Anna Siskova of Czech Republic.

The 14-year-old was nation’s best performer in the first week where she reached the second round – a feat which secured her second wild card to the main draw. However, there was nothing she could do to stop her more experienced opponent who wrapped up the tie which lasted 68 minutes.

It was the same experience for the locals in the doubles with Thomas Otu and Taiwo Owolabi losing 6-3, 6-4 against William Bushamuka of USA and Isaac Stoute of Great Britain.

Michael Michael and Christian Paul were the only locals that managed victory following their 6-1, 6-1 win over Mukhtar Andu of Britain who paired Sylvester Emmanuel.