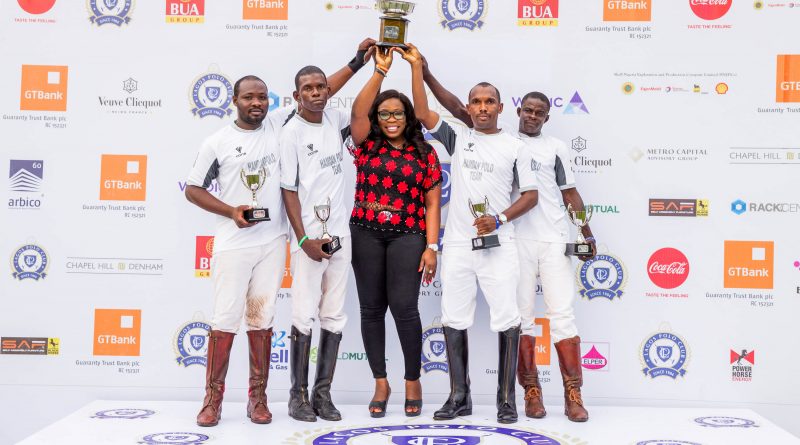 The home teams had a great day as Lagos A Plus/DDSS also emerged champions of the Low Cup by edging Kano Hamdan 6 – 5 1/2 goals.

An extravagant conclusion to a memorable 11days of high-class polo action, which has GTBank as main sponsor, was highlighted by the arrival by helicopter of the newly-refurbished Majek Cup from England just before the final match galloped off.

The visiting team went into the six-chukker tie two goals up and it increased to three when team patron, Hon Ahmed Wadada tapped in a shot from about 20 yards early in the first chukker.

The Ponys’ which also has Idris Badamasi (+3), Patricio Cieza (+6) and Juan Cruz (+7) were seeking to avoid another loss having fell in their earlier clash on Thursday but Julio Estrada kept Fifth Chukker in touch scoring a diagonal shot to end the opening chukka 3-1.

Argentine seven-goaler, Estrada scored again at the start of second chukka to close the gap and the home team, which also has Babangida Hassan-Katsina (+3), team patron Adamu Attah (+3) and Augustine Canale (+6), drew level in the second chukka through Canale. However, Ponys kept their heads and scored two more goals in the early stage of the third chukka but Fifth Chukker won’t let go as team patron, Attah and Estrada scored to level scores 5-5 heading to the fourth chukker which eventually ended 6-5 with the Kaduna team in the lead as Cieza scored again.

The final two chukkas, as expected, was fierce, and in the end, it was the higher handicap team that triumphed scoring three more goals, in order, by Eatrada, Attah and Canale for a 9 – 6 final scoreline.

In the earlier match played three-goaler, Kwame Issa and Abdulrahman Mohammed (+2) starred as A plus, complete by Habu Jigunu (+1) and team patron, Luqman Adebayo (+1) puts behind them the disappointment of their Open Cup final loss a week earlier to end their campaign on a memorable note by winning the Arbico-sponsored medium-goal event.