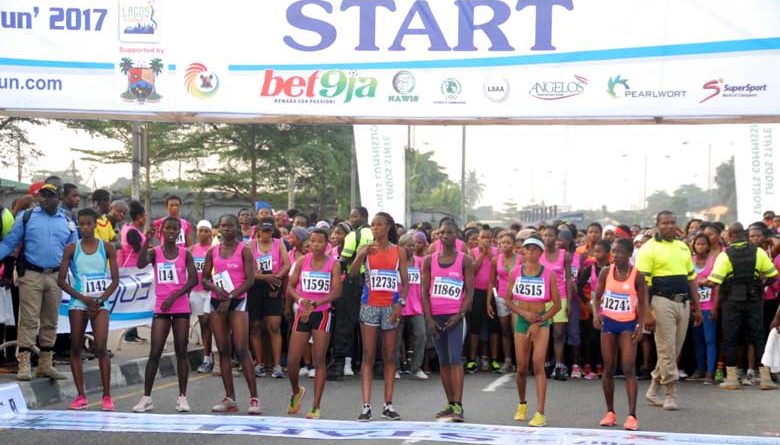 The defending champion of the Lagos Women Run, Fadekemi Olunde, was at the weekend dethroned by Olamide Adeseun who won the 2017 Run and emerged new champion when she finished at 41 minutes 4 seconds – a far cry from last year’s record of 40 minutes 30 seconds in the 10 kilometre Run.

Three thousand runners participated in the 2017 Lagos Women Run which was backed heavily by Bet9ja and flagged off 7am at the second gate of the National Stadium, Lagos on Saturday. It was flagged off by the First Lady of Lagos State, Mrs. Bolanle Ambode, who was represented by Mrs. Olajumoke Saliu.

The first 50 runners to reach inside the Teslim Balogun Stadium got cash prizes and were also decorated with commemorative medals each for their efforts.

Runners who are 50 years and above were all rewarded with the customized Lagos Women Run medals.

The Queens College, Lagos, Cheer Leaders’ Group and Brigade band and two pop artistes provided entertainment for the runners and other dignitaries after the Run.

The Coordinator of the Lagos Women Run, Tayo Popoola, expressed delight on the massive turn out of runners which cut across women from different walks of life.

She said, “The turnout was massive even on the day of the Run, we had people coming to register, and this shows the acceptance of the project. We are grateful to all who made the Run a huge success. I am satisfied that everything we did was in line with the initiative of the Lagos Women Run to campaign against brutality against women, sexual abuse, female child education, empowerment for the women’s folks, family and Issues of equality. Those who participated are more than just regular athletes.”