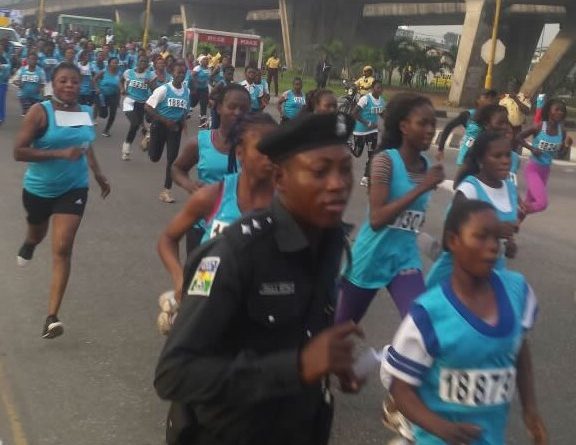 The General Coordinator of the Lagos Women Run, Tayo Popoola, has expressed her delight on the increased number of participants that will take part in the 2017 edition of the event which has been scheduled to hold on Saturday November 11, 2017, Extrasportsnigeria.com reports. It is holding in line with the Lagos State’s Government’s initiative for women.

She said that, the increase was basically because of the successes recorded at the inaugural edition of 2016.

Popoola said, “The state governor, Mr. Akinwunmi Ambode, is always happy when he sees women engage in sports events with a common purpose of eradicating vices which negatively affect women. And he is doing this with the support of his wife, Mrs Bolanle Ambode.

She then added, “The Lagos Women Run is a 10 kilometre run where women from different spheres of life will converge to do a lot of things together. It’s not just about a group of women in a sports competition racing to reach the finish line so as to win the prize money. It is a run that comes in many facets with a lot of attachments. There will be women who will come and run against cancer, some will run for campaign against women brutality and other social vices against the well-being of women which have been frowned at by the society.

“The Lagos State Government has initiated a lot of programmes to campaign against all these and seeing the Lagos Women Run to boost the initiative through sports is a measure that has been commended by the Governor himself especially as the Run’s objective is to get women to the starting point of fitness through Run. Among others, the event is expected to bring awareness to the general public about issues affecting women such as sexual abuse, female child education, family and issues of equality.”

Poopola, who is also the first woman Taekwondo practitioner in Nigeria, noted that, there are different categories of participants. There are some who will walk all through the 10 kilometres; some others will be on wheel chairs and some will race to beat the time recorded last year.

It flags off from the National Stadium, Surulere, Lagos. The number of participants for this year’s event is already more than what was recorded last year.