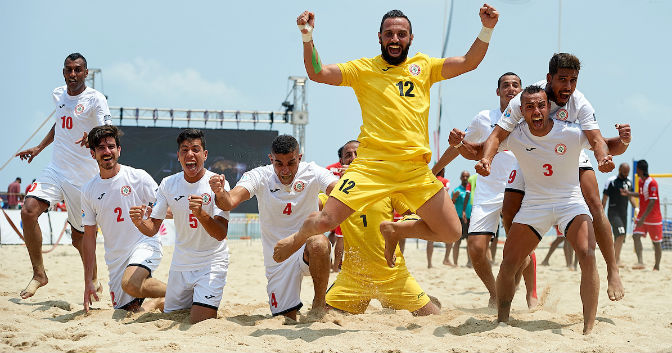 The Lebanese Beach Soccer team will be making their fourth appearance at the COPA Lagos 2017 and they have promised to finish strongly at the competition, Extrasportsnigeria.com reports. Having come third place at the 2014 and 2015 editions of COPA Lagos, they are determined to step up the ante and come up tops at this year’s edition.

This is surely a threat to the likes of the Spanish beach soccer team and Nigeria’s Super Sand Eagles, who are the host country. The Lebanese had a good performance at the 2017 AFC Beach Soccer Tournament.

Having come fourth at the AFC Beach Soccer Championship where 14 national teams participated, earlier this year at Malaysia, Alex Domingos Braga, the coach of Lebanon, is confident of victory for his team at the 2017 COPA Lagos annual beach soccer tournament.

Every edition of COPA Lagos brings a unique offering and this year’s crowns it, with not only the regular feature of sport, music, dance, fashion, fans’ zone and celebrity entertainment that comes yearly; but also there will be the first-ever Female Celebrity Match and the introduction of a Lagos-based beach soccer team, who will play their first match against Arsenal beach soccer team.

This year’s COPA Lagos promises to be a more engaging and fun filled experience for all.

Reiterating its commitment to deliver excellence at this year’s event, Samson Adamu, Managing Director of Kinetic Sports said, “This year’s edition of COPA Lagos is exciting for us as we move towards developing local talent and we are very happy to have Gidi Sharks play their first match against a world champion. We are confident about the abilities and potential in the team we have selected during our talent scout around Lagos and we are rest assured this will be the beginning of developing our own local beach soccer league that will put Nigeria on the global tourism map whilst promoting a beach culture and lifestyle in Lagos and Nigeria. We appreciate the commitment of our sponsors, First City Monument Bank (FCMB), Hero Lager and Pepsi for making it possible to implement the talent scout initiative and host the event”

Kinectic Sport will be announcing more exciting line-up of activities in days and weeks to come.