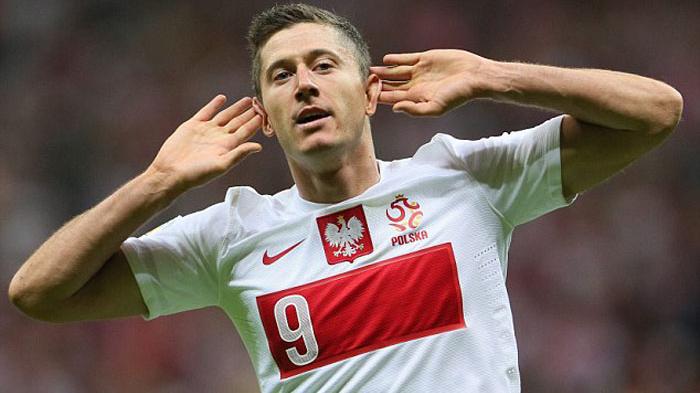 Poland and Bayern Munich striker Robert Lewandowski has said that playing Nigeria and South Korea should give his country very close understanding of their group stage opponents at the 2018 World Cup in Russia.

Poland will come up against an African team Senegal in one of their group games in Russia. The Poles will face the Super Eagles at the Municipal Stadium, Wroclaw, Poland on Friday from 8.30pm. Nigeria and Poland are on the same time belt.

The Europeans will next week face South Korea to give them some understanding of Japan whom they will battle against in Russia 2018.

Lewandowski said, “The selection of opponents was influenced by the teams we have in our group,” “Each game, however, will be different because the teams in our group have different styles.

“For us, learning these different styles will be the first lesson of what we can expect at the World Cup.

“The friendly matches itself is the first stage of preparations for the World Cup. It is a moment to check new set-up options and show quality in a non-competitive game.

“In this respect, too, it is an important element, and we want to show that we can play football, and the new players will have to show that they can fit in and give us good balance.”

The former Borussia Dortmund star added when he spoke with the Poland Football Federation official website on Tuesday, “There may be weaker matches, but if we want to present ourselves as well as possible, we must prove quality even in training.

“We know that it may look different. If the result is not perfect, it does not mean that it will be bad, because maybe the game will look good, there will be optimistic conclusions. It may not be a test, but showing that we also have quality to do well.”